Beetle Bailey is freaking me out

A panel from this week's Sunday funnies: 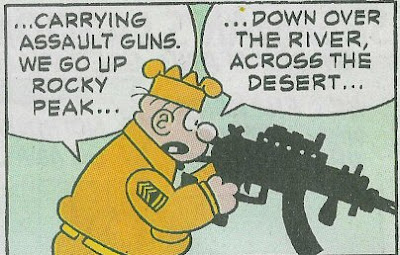 This is the first time I've seen a realistic firearm in Beetle Bailey. And it's not just a generic "assault gun", a term a military man would never use. It's a Heckler & Koch MP-5 tricked out for SWAT type work. This sudden intrusion of real war weaponry really highlights how utterly out of touch Beetle Bailey is with the real world and the real U.S. military. With this gun on the playing field it wouldn't surprise me the least to see ol' Sarge and Beetle discussing their next trip to Iraq. But of course that doesn't happen in the utterly banal world of newspaper comics. Superhero fans sometimes complain that their favorite characters are stuck in narrative stasis, but the newspaper comics fossilized a long time ago. In comparison Wolverine changing which costume he wears looks like real character growth.