Today I'm just chewing the fat (or mangling the electrons, whatever) about some old games. It's sorta what I do here. 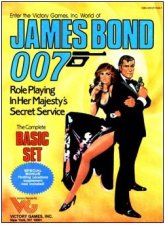 James Bond 007
The hip new kids have Spycraft 2.0 and the grognards clutch their tattered copies of Top Secret, but for me the quintessential espionage rpg will always be James Bond 007. Released by Avalon Hill's short-lived Victory Games imprint in '83 as part of Operation: Oops! We Passed On That Gygax Manuscript And Now We Have Some Catching Up To Do, designer Gerard Christopher Klug did everything right with this one. If it was a Bond staple, this game covered it. Guns, fistfights, gadgets, chase scenes, and casinos. And the first and maybe still the best system for seduction ever devised. Unlike most rpgs, these seduction rules are crunchy enough I don't think I'd feel weird if one of the PCs tried to bed their own Bond babe.

As a kid this game was a little too heavy for my group, but nowadays I look at oo7 and see something that would work well for a explodey and sexy little one-shot. The line supporting this product was pretty extensive, but large chunks of it consisted of adventure modules that were replays of the movies. I can't quite bring myself to plonk down money for an adventure I've already seen. But the other supplements were good, particularly Thrilling Locations and the Q Manual. The latter was the first 'equipment porn' book I ever owned for an RPG, though I'm not sure it's worth the collector prices nowadays. The core rulebook contains enough guns and cars and whatnot that extrapolating your own wouldn't be very hard. The one adventure module I'd really like to flip through is You Only Live Twice II: Back of Beyond. The other fake sequel Victory Games did, Goldfinger II , reputedly sucked donkey balls.

But questionable adventure modules aside, the corebook is solid. The random encounter charts include things like "shady contact" and "priviledged henchman". And the large NPC section includes stats for Pussy Galore. What else can I say? 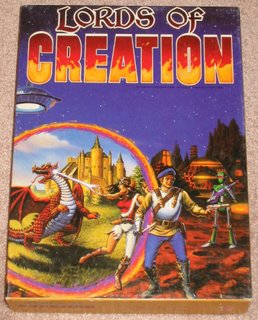 Lords of Creation
Lords of Creation was another member of the Avalon Hill rpg blitz. (The others were an oddball non-Gloranthan licensed version of RuneQuest and the infamously complex fantasy rpg Powers & Perils. It remains a mystery to me why anyone thought releasing two incompatible fantasy rpgs at the same time was a good idea.) Tom Moldvay created this puppy fresh off a stint at TSR, where he was responsible for editing the mighty 1981 Dungeons & Dragons Basic Rules, the one with the awesome Erol Otus cover, as well as writing the weird but fun adventure module X2: Castle Amber.
Turning the Moldvay weirdness first found in Castle Amber up to eleven, Lords of Creation was a game of dimensional-hopping, time-travelling, multi-genre adventure. Not a generic or universal system, Lords of Creation had its own quirky set of powers and skills that were not designed to cover every possibility. Rather the available powers were like the spells in Basic/Expert D&D: a good enough selection to get the game started with the implication that the GM could add more as necessary. (Crazy aside: I'd abbreviate the game as LOC but those three letters will be forever burned into my brain as Liquid Organic Cleaner. Back when I was a kid my folks almost ended up in the Amway cult and LOC was one of their big products.)
PCs in Lords of Creation worked on different rules than everyone else. They have levels, whereas NPCs do not. Although the PCs start out as simply skilled normal people, each new level unlocks some of the hidden godlike powers contained within them. It's very gnostic, really. At level ten you are declared a Lord of Creation and you gain the ability to make your own worlds. This is kinda like the ancient Gygaxian concept of the Junior Dungeon Master, as Lords of Creation are encouraged to GM when the party ventures into their realm. Although you could call achieving the rank of Lord of Creation a victory condition, the real heart of the game is much simpler than that: Here are the keys to the multiverse, kids. Go out and have fun. 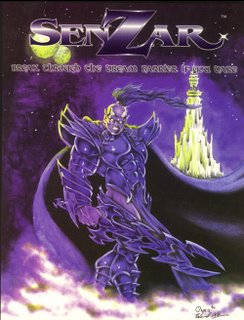 You gaming hipsters who know SenZar from its bad rep on RPGnet are probably laughing your asses off right now. This game has a World of Synnibarr-level bad rap over there. And it is mostly undeserved. I will grant you that it's yet another fucking fantasy game. And its over-testosteroned "Gaming in God Mode" approach is the absolute height of adolescent male power fantasy drivel. But if you judge the game on its own merits, as adolescent male power fantasy drivel, then SenZar gets a big shiny gold star. Because SenZar is the most mechanically-coherent adolescent male power fantasy I have ever seen. I am not pulling your leg when I say that before the publication of D&D 3E this was the single tightest design in the field of killing people and taking their stuff. Everything in the book was dedicated to the basic idea of rocking out - hard.
In fact, the only reason why I never played this game was because I didn't locate a copy until after 3.x was on the scene. I run a epic gestalt campaign where one guy took a level in Ninja just because he can. That, my friends, is the exact moment when SenZar started to look redundant. But if anything I've said about the game picques your interest, do yourself a favor and check out Jason Sartin's excellent review. 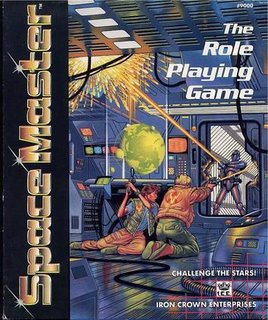 RoleMaster's redheaded stepchild doesn't get nearly the love it deserves. Probably the main reason for this neglect is that by the time it really hit its stride the market for sci-fi games was already saturated. Stupid kids like me played West End's Star Wars or FASA's Star Trek or TSR's Star Frontiers. The hard core sci-fi gamers already had Traveller. But if you're the kind of nut who thinks percentile dice and uberlethal crit charts are neat, then Space Master is your kind of game. I can only really speak for the late eighties 2nd edition of the game, though I undertstand the 1st edition wasn't too different.
What really surprises me is that I have yet to hear of anyone using Space Master to run games set in Traveller's Charted Space/3rd Imperium setting. I'm telling you those two would go together like peanut butter and chocolate, especially if you had a Classic Traveller ruleset handy to cover things like starship construction and trade rules. One of the constant complaints of CT players is the relatively sparse combat rules. Space Master delivers on that in spades.
The Space Master GM book also rattles off some other ways of making the game work, aside from their own kinda bland 'Terran Empire' setting. My favorite suggestion was the idea that you could do modern era games in the mold of Buckaroo Banzai or the old British series UFO. I dig the concept of using a space operatic system for running around in dark suits (fedoras and skinny ties would be mandatory) and getting into laser powered fistfights with the grey aliens. 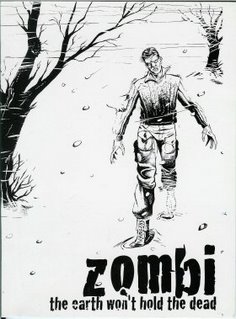 Subtitled The Earth Won't Hold The Dead (though I like to think of it as "That Other Zombie Game"), Zombi is exactly what you would think it is, a game about surviving the horrors of the zombie apocalypse. I got both Zombi and a huge pile of All Flesh Must Be Eaten books on the same trip to The Source in Minneapolis-St.Paul, Minnesota. The Source effin' rules. If you ever get a chance to go there, do not pass it up. It's a five star comics and games store with the best used bins I've ever seen at an FLGS.

Anyway, a year later I had sold off my AFMBE stuff but I've still got Zombi. In a nutshell here's why I pick Zombi over the more popular alternative: All Flesh tries too hard. That sounds stupid and maybe it is, but Zombi shows up to the gig, strums a few chords, and calls it a night. No big whup. Meanwhile I feel like AFMBE is killing itself trying to write a space epic rock opera concept album. AFMBE, even using just the core book, is way more game than I'll ever need for a concept as straightforward as "Holy shit! Zombies!" Hell, I have an old print-out at home for an internet freebie called Dead Meat that almost gets the job done in 3 or 4 pages. (Ron Edwards's old review of Dead Meat is almost as long as the game itself, as I recall.)

But Zombi has its own virtues, quite apart from not being AFMBE. Character generation is a snap. Your PC and everyone is only defined by 10 skills. Not traits, skills. If you want your dude to be strong or puny you use the under-defined advantage/disadvantage system. Which I like just as under-defined as it is. The zombie rising scenario outlined manages to contain both charming details and maddening holes. ("Why? Why are the dead rising?" is my favorite question to not be answered in a zombie game. I like my zombie apocalypses harsh and inexplicable, with a side order of black despair.) The brief adventure hooks are pretty sweet, too. All in a cute little digest-sized package. Well, it's made in Britain, so the books not exactly digest-sized. Rather it's some sort of alphanumerical size like A4 or B52 or U2 or something.

Incidentally, I should mention that Zombi was published by now-defunct garage outfit Crucible Design, who also released SpaceNinjaCyberCrisis XDO. That game that should probably win some sort of award for awesomest rpg title.