not the Caves, the Crypts 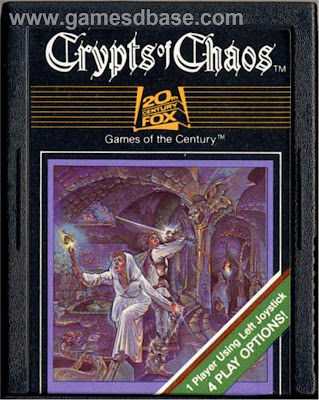 Crypts of Chaos was a D&D dungeon crawl that works on the Atari 2600.  You played a pixel (roughly half the size of the square you played in Adventure) that wandered around a maze ganking monsters and swiping their treasure.

Like Jamie Mal, I felt that it wasn't very good, but it was D&D-like and playable on an Atari.  That was enough to get me onboard when I was a kid.  The ability to choose between your sword (unlimited charges, short range), wand (limited charges, long range) and magic ring (totally kickass, very limited uses) plus the array of monsters that shalumped down the screen at you made for fun times.  I particularly liked the skull guy pictured above and the one-eyed blob.  Each monster had its own sound effect and the blob's theme really communicated its alien intelligence, cool and unsympathetic.

But what I really wanted to talk about today was the cartridge/box art.  Scroll back up and check it out for a bit if you can't see it right now.  Click for the bigger version if you'd like.  Here are a few observations: