Let me tell you about my favorite band 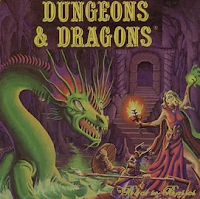 It was summer 1982 when I picked up my first album.  I was a dumb kid and I didn't know what hard rock or heavy metal were, I just knew I liked the cover art.  Back to Basics, the fourth album from Wisconsin band Dungeons & Dragons, totally blew my mind.  It was like the Death Star exploding, but in music form.  At the time I didn't realize that Tom "the Bomb" Moldvay was new to the band, replacing original guitarist Dave Arneson.  I just knew I liked the sound.  Probably my favorite tracks are the opener, "The Life and Times of Morgan Ironwolf" and track eight, "Blood-Thirsty Thoul". 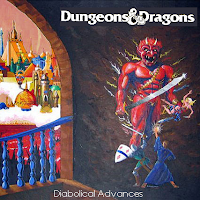 As soon as I could I tracked down the only other record by D&D available in local stores, their masterpiece Diabolical Advances.  This album was heavier, more complex and darker than Back to Basics.  You wouldn't believe the hours I wasted trying to figure out the lyrics.  "Segment by Segment" and "Battle of the Psi Lords" still baffle me to this day.  I've looked the lyrics up online but I'm just not convinced that Gygax is speaking English in these songs. 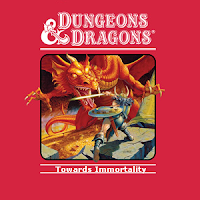 My buddy Dave was one of the first people I turned on to the Dungeons & Dragons sound.  He somehow managed to track down a copy of 1983's Towards Immortality before I did.  The sound was a lot like Back to Basics, but clearly it was lightened up for radio play.  Even so, track three, "The Death of Aleena" anchored this album to the stuff we already knew.  Dark, heady stuff for a kid.  It was about this time that the first greatest hits album for the group appeared, Unearthed, which featured stuff from albums we hadn't even heard of and a great cover of Blue Oyster Cult's "Career of Evil". 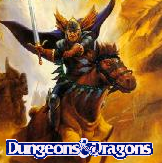 The 1989 release Second Chances was the first time as a kid that I realized a band could change in ways that you didn't want them to.  Me and my friends still bought and listened to this album, but we could hear the corporate-rock glitz screwing up the heavy sound we used to love.  So we turned to other bands, mostly Van Halen and BattleTech, as I recall.  The EP With Skill and Power only cemented my opinion that D&D was going in the wrong direction musically. 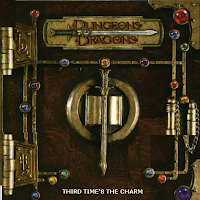 By 1999 I was old enough to feel nostalgia for the good ol' days, so the release of Third Time's the Charm was welcome.  It wasn't the smack in the face of Diabolical Advances or Back to Basics, but it had an interesting sound of its own.  The punkish "Behold the Icons" and the utterly inexplicable "Attack of Opportunity" were pretty grating, but I really enjoyed most of the rest of the songs on this one.  I played this and the follow-up live album, Half A Loaf of Rock You more than any record I had bought in years.  The new greatest hits album, the unimaginatively-titled Unearthed II, was also pretty great. 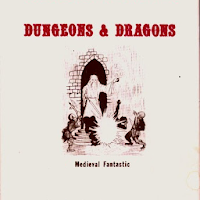 It was about this time that I decided to track down the one that started it all, the original 1974 album, Medieval Fantastic.  I couldn't believe how raw this sound was!   It was almost like an American version of Motorhead, fast and crazy and not giving a damn what you think.  I was a new rock and roll fan all over again.  The last track on this one, "Eldritch Wizardry" remains one of my all-time favorite songs.  It was around this time that I also started hunting down the bands that followed in the wake of D&D's initial success, particularly The Judges and The Dave Hargrave Project.  A couple of D&D cover bands, particularly the Labyrinth Lords and Raggi & The Flame Princesses, also found a spot in my collection.

What's funny about the '77 D&D release, Surgeon of the Underworld, is that I owned it for years 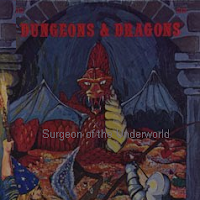 , as I bought it during the gap between the With Skill and Power EP and Third Time's A Charm.  But it wasn't until a couple years ago that I actually bothered to give it a listen.  What a fool I was.  Here in one disc was everything I loved about the entire D&D corpus.  To this day I can't believe that both "The Wonderful Scrolls of Doctor Holmes" and "Melee Resolution" were omitted from both Unearthed volumes.  They had room in Unearthed II for a cover of "Sunshine Superman" but for nothing from this album?  WTF? 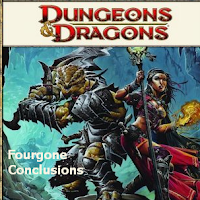 Which brings us to Fourgone Conclusions.  I know a lot of people like this one, but it just doesn't do anything for me.  The new sound is too J-poppy for me or something.  And firing original bassist Mike "the Maniac" Mornard and replacing him with the drummer's son was a terrible idea.  Who the hell does that?  I'm glad the band is back in the studio working on a new album.  If The Essentials live album is any indication, they seem to be leaning a little bit towards that original sound.  I guess we'll see.