found this at my local con 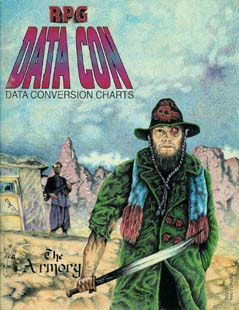 'At this point, I should let you know what it is that makes me qualified to write such a set of charts.  Let's start with the fact that I have been gaming for more than 10 years and ran the "Armadillo Game Club" for a few years.  As well as the fact that I am a "Contributing Editor" for a local game "fanzine".'

That passage from the intro to this book cracks me up a bit.  Dude, it doesn't matter if you were president of the local chapter of Nerds Anonymous, either the charts work or they don't.

So anyway, RPG DATA CON is 30 pages of conversion charts from 1992.  Here are the systems it attempts to cover:

One of the charts is called "Level & Points".  Here we learn that a 16th level AD&D character is roughly equal to a 74th level RoleMaster character or a 400 point Champs character.