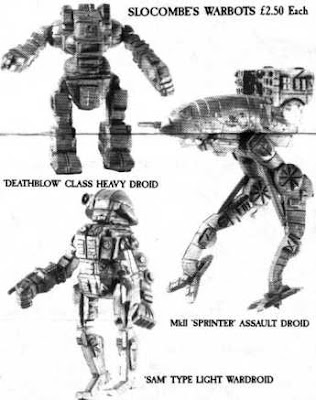 So these figures were sold in the earliest days of Warhammer 40K as robots.  Any players from the Rogue Trader era (the original game, not the recent RPG) remember actually using the robot rules?  They're pretty much the most complicated part of the original game, as I recall.

Those of you who identified these figures as BattleTech mechs, fret not!  The top one is a dead ringer for the Archer, an 70-ton missile monster from first BT boxed set (and one of the anime designs later de-canonized as "Unseen").  The one with chicken legs is clearly based off of Duane Loose's original illo of the Catapult from the original BattleTech Technical ReadOut 3025, the first big book o' mechs.

[Side note for BTech nerds on the Catapult's connection to the later Madcat from the Clan era:  Years before the clan stuff was in print a guy from Chicago (where FASA was headquartered) would occasionally come to my part of Illinois for BattleTech events.  He owned a Catapult figure to which he had attached Marauder arms.  He even called it a Madcat.]

The bottom robot isn't an exact match to any mech design I've seen, but it's very close to Loose's version of the Vindicator, House Liao's 45-ton miscellaneous workhorse machine.  Dig the illo:

Note the head mounted laser.  The arm mounted laser is not visible in this pic, but the Vindicator definitely has one.  Basically, if you swap out that big ol' particle cannon for a proper forearm and hand you'd end up with something that looks a crapload like the 'SAM' Type Light Wardroid from Slocombe.

Anyway, I was just curious yesterday to find out if anyone remembered these guys as 40K robots.  I knew a lot of people would see them as BattleTech figures.  Coopdevil offered a theory in the comments yesterday that these guys started as licensed figures, but I think the missing cannon on the SAM points more towards "borrowed" designs.