Today I want to share with you an amazing book that is neither a gaming product nor a fantasy novel. I know it’s hard to imagine, but such obscure tomes really exist! The book I have in mind is called The Five Ages of the Universe: Inside the Physics of Eternity, by Fred Adams and Greg Laughlin. In addition to being an amazingly fun and informative read, Five Ages stands out as one of those books that comes jam-packed with crazy inspirational fodder for the enterprising GM. Page 74 alone could serve as an awesome seed to kick off a truly radical Traveller homebrew, but I’m going to be a jerk and not tell you anything about that. Instead I want to share a scanned graphic and a brief excerpt that I think would really spice up a standard fantasy setting.

Many off-the-rack fantasy milieus feature vast previous eras, largely aping Tolkien’s Five Ages and Howard’s Hyborian Age. I do this myself, though in the past I also tended to rip off Greek and Norse myth, with their ages of titans and giants and overthrown gods. Thus I would sometimes cite previous epochs of the campaign world as “The Time of the Titans” or “When Dragons Ruled the Earth” or crap like that. Without even tapping into the larger tableau of cosmic history, The Five Ages of the Universe offers a grandiose and scientifically plausible way of establishing sweeping periods of planetary history when Things Where Different Than They Are Now. Dig it: 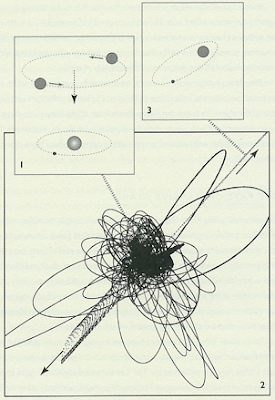 This computer simulation shows the outcome of a close encounter between a red dwarf binary pair and our solar system. As the red dwarf pair drops toward the Sun, Earth is almost immediately handed off to the smaller star and stays with that star for three long, looping excursions. After slightly more than 1000 years, Earth is palmed back off onto the Sun, where it remains for the next 6500 years and suffers many complicated close encounters with the other stars. After 7500 years Earth is captured into an orbit around the larger dwarf, and soon thereafter, this star escapes. Earth is pulled along an elliptical orbit that might possibly be habitable. A capture of this sort has about one chance in three million of occurring before the Sun turns into a red giant.

That last line is the point of the exercise, as the authors are looking at scenarios whereby human life on Earth might have a chance of surviving the Sun’s death-throes. Without such interstellar intervention the Earth will be toast (literally) when ol’ Sol enters its red giant phase in a few billion years.

But let’s take this one in 3 million longshot and use it to power the pre-history of a campaign world. We’re going to assume that the world remains habitable during all these gyrations, but that the pass-off from one star to another is sufficiently tumultuous to induce natural disasters like tidal waves, earthquakes, volcanoes, dogs & cats living together, etc. So here’s the history of the campaign world in a nutshell:

(The Time of Great Troubles easily breaks down into many sub-eras of centuries in length, each punctuated by a Time of Two (or Three) Suns that lasts a few days or years.) The end of each of the previous three epochs would feature the natural disasters described above, an overthrow of existing civilizations, and the rise of new powers in the world. Shifting from vaguely plausible science into outright pseudo-science, let’s throw in some Velikovskian-style mutations, whereby during planetary disasters animal populations can undergo phase shifts from one species to another, a sort of crazy quantum leap approach to evolution. This allows the dinosaurs of the Age of the Golden Sun to instantaneously evolve into the dragons of the First Age of the Red Sun, or whatever.

So now you can go back to your list of epochs (and sub-epochs) and list who came to power in the new era, who lost power (maybe with diaspora populaces), what creatures/races went extinct and what new lifeforms came into existence. Keep a complete copy for yourself and supply any players who enjoy reading fluff with an edited and incomplete version of your history. This allows you to set-up situations like this:

DM: This rooms is covered with ancient murals depicting cobra-headed men with crowns slaying hoards of pointy-eared dudes.
Player 1: -Gasp!-
Player 2: What? What’s going on?
Player 1: The Cobra Kings conquered the Elven Empire during the First Age of the Red Sun; this section of the dungeon may be over seven thousand years old!
Player 2: That old elf we talked to last session told us that the True Crown of the Fay had not been seen in millennia. We must be on the right track!
Player 3 (to Player 4): Do you have any idea what they’re talking about?
Player 4: Naw. I’m just here to kill things and take their stuff.
DM: And that’s the cue for the Cobra Wraiths to attack. Roll for initiative, suckers.
All Players: Aieeee!

[Let us close the curtain on this sorry scene.]