I don't know about where you're at but yesterday was mothertruckin' cold. The night before the windchill dropped way down and a few inches of snow fell. Here's the view last night from the front window of Armored Gopher Games. 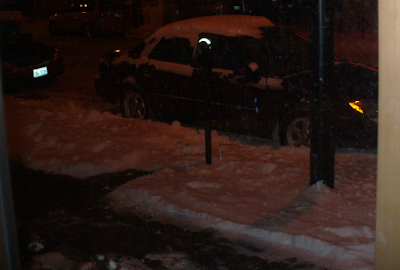 I've braved thicker snow and colder temperatures to get to a game. One year I got frostbite on an ear walking through the parking lot of a particularly chilly Winter War. But not everybody is stupid enough to risk bodily harm to sling dice. That's why I was very gratified that Carl came to my Cinder campaign kick-off last night. Here's Carl rolling up the first of the three PCs he played last night. The first two were killed by ogres and served up as dwarf stew. 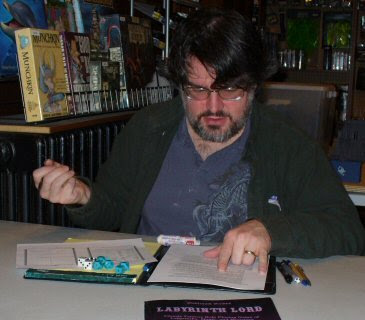 I've known Carl for years. We've played more board games together than I can remember at a local grognard's house. (I know I hang out with the Old School set online, but here in Champaign-Urbana I've just barely risen above 'punk kid' level in the local scene. There are dudes here who remember when Gen Con was this little gig you did to play some Diplomacy.) Anyway, I've always admired Carl's ability to keep up on multiple sub-sections of the hobby. He seems equally at home with hex-and-chit wargames, abstract Euro things, collectible cards (I think he still plays L5R) , and RPGs. As best as I can recall last night was the first time I actually got to do some role-playing with Carl, so that's cool.

My other player for the evening was the Squirrel, one of the store owners. He played in two of my old school demo games last year and we had a grand ol' time. Squirrel also went through two characters before getting some success. His contributions to the ogre's stewpot were a halfling and a cleric. The cleric's brother, another cleric, made it to second level last night. 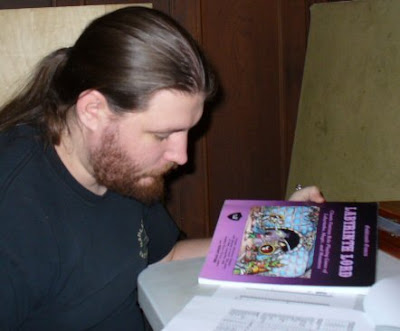 Squirrel spotted my homemade Slot Dice and tried them out. His original halfling, Sly Mischivan, made 40 gold pieces on his first throw but managed to lose 30 of it in the following two wagers. 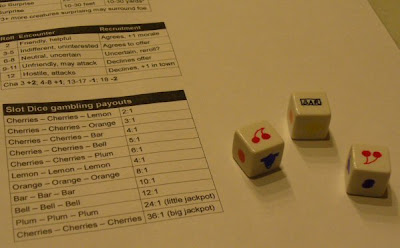 This gambling game is from Appendix F of the Dungeon Masters Guide, by the way. I need to get some blank d8's so I can use the eight slot version as well. 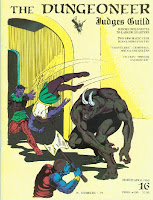 The adventure proposed for the night was "The Lair of Krepache", from Dungeoneer #16 (March/April 1980). I placed Krepache lair in hex 0915 of Wildland, the first setting in Points of Light. From there I figured the baddies could threaten the communities of Delen and Naspers. The party is based out of golem-haunted Delen, though that didn't really come up this first session.

The evil knight Krepache and his minions were designed to be an even match for a mid-level party, so I had gone through ahead of time and cut back quite a bit of the opposition. It was still a tough go for a couple of first level adventurers, as the two total party kills attest. Fortunately both players understood that significant casualties were part and parcel of the D&D experience, so upon dying they just got cracking on their next dudes with nary a complaint. They would have died even more had it not been for my "you always get a save vs. death" rule. But then that rule and some of my other player-friendly houserules is why I felt comfortable throwing an adventure with ogres and trolls at first level PCs.

We ended with Krepache's forces having been dealt a bloody nose, but they are definitely not defeated. Carl might not make the next session, but I have reason to expect Squirrel to continue to lead the heroes of Law and Greed against the evil knight's troops. His zealously Lawful cleric knows of at least one Anti-Friar of Chaos lurking in the dungeon. Other options available to the players include following up on a partial map to a temple in the ruined city of Novus Tydaris and trying to follow the directions in the journal of a dead adventurer to the distant tomb of a sorcerer named Nereshanbo. Or you know, whatever the PCs come up with.