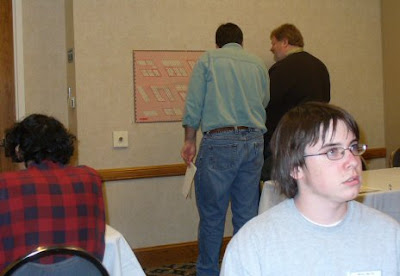 My brother-in-law Jim and another player (is that Greg?) examine one of the maps in the Blind Sniper room. In the foreground is Jim's son Ian. As I mentioned before he and I crippled each other on round 2 of the game. The fella in the red plaid shirt is Alfred, who won the all-new, all-crazy Board Gamer Agonistes award. Each boardgame ran at the convention was worth a number of points based on total players at the table. The winner got a bunch of those points and other people got some points at the ref's discretion. Al came out with the highest total, though my sister apparently did pretty darn good as well. 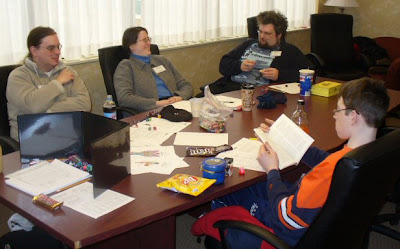 My Encounter Critical players. From the left that's Josh, Kathleen, and Doug. They've played in several con games of mine over the years. Our tastes intersect enough to create some magnificently fun one-shots, but I sometimes suspect that we'd drive each other crazy in a lengthy campaign. They'd be busy telling some sort of anime-based storyline and I'd be trying to fight every NPC encountered. Across the table from this terrific trio is Marc, Dave Hoover's son. We all had a lot of fun together. 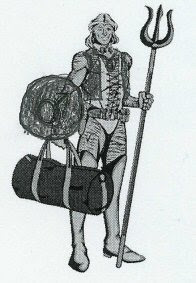 After buying a bulletproof vest and shield, Josh modified his character illo. Not pictured: the rollerskates he swiped off of a one-eyed mutant midget. 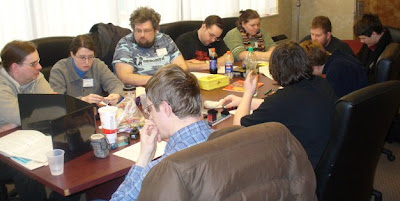 Here's my ten-player D&D freak-out. Josh, Kathleen, and Doug are a little more crowded together in this shot! Everyone is working on characters here. For most events I love making my own pregens, but a nostalgia powered game like this demands random chargen at the event. 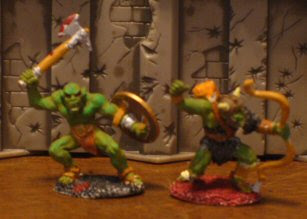 One of the vendors, Thompson Productions, had a painting demo table. They had a selection of Reaper brand figures and paints. I painted these two guys. Even with the limited time and selection of colors I thought they turned out better than I expected. This really gave me the boost of confidence I've needed to take minis painting more seriously. And working on the archer's chainmail made me a believer in drybrushing. The pic is terrible, that actual figures don't look very good (the sculpts are nifty, the paint job is terrible), but up close that chainmail looks awesome. All thanks to a simple drybrush of silvery steel over a black base. I'm definitely going to paint some more figures after this experience.

Finally, here's some links to pictures of the monsters I made for the Friday night Clay-O-Rama game.

Klaggor, the Thing from Beyond the Stars!
Mr. Maw
The Stinging Vampiric Two-Faced Snake-Weasel
Little Arty, the Littlest Artillery Piece