Every once in a while I flip through the galleries for the D&D minis line. I was looking for some alternate figure ideas for my current PC, Osric the Slayer. He's a human barbarian type with a elf-forged greatsword. Here are the contenders.

This Barbarian Mercenary doesn't seem any more interesting than the Longtooth Barbarian I currently use.

The sheer size of this Human Dragonslayer's sword draws attention away from the wielder, which goes against my own personal answer to the riddle of steel.

This Redgar: Human Fighter might work. I'd have to see an actual production copy up close to make that call.

I also found this Xeph Soulknife that looks like a good pick for Abu of the Thousand Scars, my Xeph souldknife cohort. I dig the action pose.
Next are some minis that I think would make great PCs.

I have one of these Cleric of St. Cuthebert dudes. He's based on this awesome picture. Two words describe this guy: bad ass. This mean motherfuckin' servant of god makes me want to play a cleric. I don't say that often. 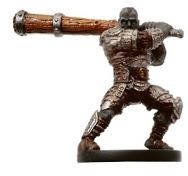 If Osric the Slayer is killed and unable to be revived, I plan on buying my own Goliath Gleric of Kavaki. When I saw this pick I said "Damn!" I said it out loud. Because he looks exactly like the mental picture I have of this half-giant knight/wilder character concept. I never expected to find a big guy in plate mail wielding a great club.

What can I say about this Warforged Wizard? Regular readers already know of my fascination with spellcasting robots.

This Spellscale Sorcerer is too weird to not love. Spellscales aren't one the approved list in Jon's campaign, so I'd probably use this guy for some sort of magic-using Elan.