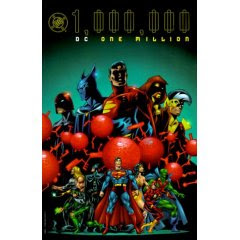 I don't normally read big crossover events. The original Secret Wars was important to me. It and the Official Handbook of the Marvel Universe were the comics that made me a big Marvel nerd as a kid. When I got back into comics in the early 90's I bought the Death of Superman story arc in trade and followed the Rise of the Supermen story that followed. I really dug the Amalgam experiment and bought all those issues in floppy or trade. I only own one comic with the words "Civil War" on the cover, and that would be Nextwave #11. A few years back I stumbled across the DC One Million trade paperback. I had missed this crossover the first time around, but the trade looked interesting, so I picked it up.
The basic deal witht the series is that the Justice League (kicking it in full iconic membership mode) met and interacted with the Justice League of the far future. How far in the future? One million issues of Action Comics in the future, hence the name of the series. That works out to more than 80,000 years.
This is a fun, wild ride of a comic story, so much so that I have considered tracking down the issue not compiled in the trade. One of my favorite parts is from one of the Superman books, IIRC. Superman is in the year 80K or whatever, and tracks down Platinum of the Metal Men, who is still alive in the distant future. She gives Supes a broad outline of the history of the House of El, the superhero dynasty he will one day found. One basic theme of her tale is continuity. The superheroes of the future will be legacy figures of the iconics of the present.
From those couple of pages of background exposition came my idea for a sci-fi superhero adventure: Justice League 5000AD. Think basically along the lines of the Superfriends in space, in the future. The project never made it out of the brainstorming stage, but I designed a lot of characters for it with Heromachine. I don't think I'll ever run JL5K. I'm not very good at supers games and inexperienced with sci-fi. The project seems to play to my weaknesses. So instead, I'll share with you all the character designs. Feel totally free to steal this stuff for your own gaming, should you feel so inclined.