Be Wary of Wizards

So I'm still putzing around with Tunnels & Trolls solitaire adventures. There's a lot of them. At least 25 full-length solitaire modules were published by Flying Buffalo back in the day, as well as numerous mini-solos appearing primarily in Sorcerer's Apprentice magazine. And they continue to appear at places like drivethru. Most of these adventures are designed for one PC. A very few allow you to run a whole party. 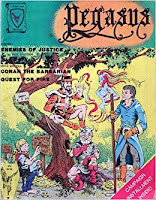 One of these party-based solitaire adventures is "Old Dwarf Mine" by Roy Cram, originally published in Pegasus issue #7 (Judges Guild, 1982) but also available online in revised form here. The revised version says you can take a party of up to ten PCs level 1-3, so I rolled up ten PCs yesterday, bought equipment this morning, and played the adventure this afternoon.
Here's my party:
I did pretty well at first. Other Fili and Frmahere defeated a half dozen goblins that attacked the party in a narrow confine.  A giant spider poisoned Fili but he survived to aid the rest clear out the spider nest. Things started to go downhill when a hobgoblin ambush riddled Fili's body with crossbow bolts, leaving him dead. Some gems and a couple magic items were recovered as well as a little gold. But then we fought a wizard. The party defeated the wizard's chief goon, but Elenmír and Vidhara were killed by the classic wizard attack spell Take That, You Fiend. Then I made a hotheaded move that destroyed the wizard, the party, and the entire damn dungeon.
One of these days I'm going to have a real success in one of these damn solos.