Okay, here I go again on this space hexagon nonsense. Let's start with a typical Traveller subsector like this: 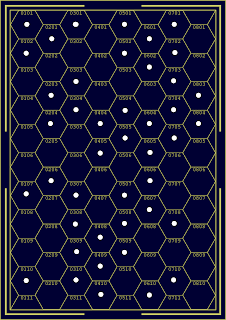 Let us assume, for purposes of this exercise, that those 43 white dots represent all the places you can go in this subsector with a starship. Each one is a solar system with at least one planet you can visit or at least a source of fuel.

But now let us add an assumption about jump drive technology and the nature of jumpspace, the spooky n-dimensional realm starships mov through to achieve FTL speed. Here is the assumption: three different jumpspace dimensions intersect this subsector. Each jumpspace only reaches some of the worlds marked above. Furthermore, whenever jumpdrive is invented, the resulting technology only interacts with one jumpspace and not the other two.  We'll call the three resulting technologies Jump-Red, Jump-Green, and Jump-Blue.

A starfaring society that exclusively used Jump-Red drive might only be able to access the following worlds: 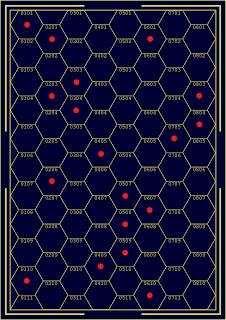 Meanwhile, another society that developed jumpdrive on their own might be equipped with Jump-Green and only be able to visit these worlds: 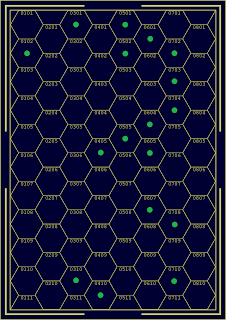 Meanwhile, a third polity entering the subsector might use Jump-Blue. Hence, they would be limited to visiting these hexes: 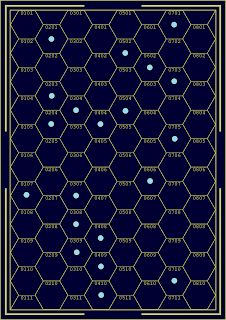 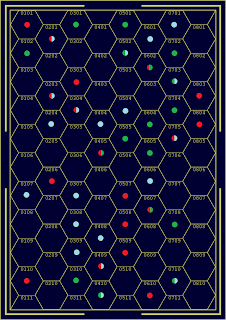 Lots of interesting situations arise from this model, especially if you assume exclusive use of one drive mode per civilization. For example, both trade and warfare become very interesting at worlds reachable by two polities who normally can't visit each other. Or say someone from a Jump-Blue society want to dodge the space cops. They can effectively skip town by hopping to a "two color" system, then buying a ticket on a ship that uses Jump-Red or Jump-Green.

Of course, espionage and/or salvage will eventually lead to each civilization cracking the secret of the other jump colors. But then what do you do? Build fleets that can only visit a small fraction of your own worlds in order to be able to interact with others? Equip some ships with two different sets of engines? Maybe higher up the Tech Level list someone can invent a Jump Converter that allows you to switch between the color modes.