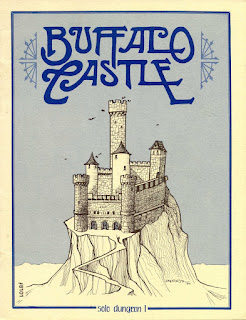 I was feeling some anxiety this morning (the plague being in the land gets to me sometimes) so I decided to distract myself with a couple old Tunnels & Trolls solo adventurers. The Mighty Hugo, a strong but poor human warrior, entered the legendary Buffalo Castle by Rick Loomis (RIP). Hugo didn't get very far before being smashed flat by a wandering giant. Too bad. He had pretty good stats.

Igmutt G. Goblin, who had previously survived the adventure Goblin Lake, entered the castle and took another route. He escaped the clutches of a giant octupus only to run into a killer jellyfish. Igmutt probably could have beat it had he possessed a better weapon or some armor, but he was a poor little goblin equipped only with a flint knife and a filthy loincloth.

Finally, Kanmund Moonfox, another human warrior, entered Buffalo Castle. Kanmund wasn't as strong as Mighty Hugo, but he had much better starting gold and entered the dungeon with a broadsword, leather armor, and a shield, as opposed to Hugo's bludgeon and buckler. Unfortunately, Kanmund kept wandering the halls, finding very little adventure. He found 10 gold pieces on the floor of a room before a wandering jellyfish jumped him. He slew it, but eventually he left the dungeon out of sheer boredom. Though he did have to fight another jellyfish to escape the Castle. 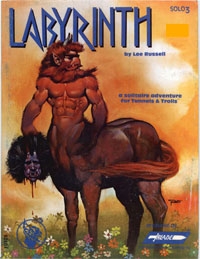 Kanmund then visited the solo module Labyrinth, which has a nice Greek mythos feel. It's written by Lee Russell, "based on a concept by Daedalus." Kanmund picnicked with gods, got drunk with a satyr, and was blessed by Athena for not being a dick. Unfortunately, he bumped into Ares when he was in a "murder first, ask questions later" mood. Thus ends the epic of Kanmund Moonfox.

I've got several of these T&T solo modules laying about the place, but I only play them once in a blue moon. But I'm kinda digging on the T&T rules right now and have been thinking about running a game of it online.