If you're anything like me (which I can't necessarily recommend) you have a large enough array of print and PDF roleplaying products that you'll never use all of them. Here's a way you can get some juice out of that archive of rpg junk. Maybe doing this will even help you feel better about blowing all that money on game crap.

Anyway, here's the basic idea: let's say I have something I want to add a little background color to. This could be a magic item, a character, or any other little campaign element that could be spruced up. You rarely need a fullthroated background for this sort of thing, a line or two will do. Like, I want to add some spice to a nice magic sword in a treasure trove. This sword isn't a key plot point, but it's +3 and so will likely stick around for the long haul. A little flavor text could shift the player reaction to it from "+3! hot damn!" to "this is the coolest sword I have ever owned." 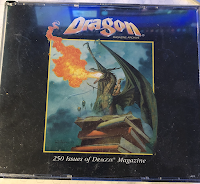 So I have the old Dragon magazine CD-Rom set with PDFs of the first 250 issues of that venerable institution. (They're probably all a google search away nowadays.) So use the last line on the WotC die roller (my other favorite Wizards product for the last decade or so) to randomly determine a number between 1 and 250. I get a 75, so I pull up issue #75. I also randomly determine a page and end up on ad for two modern era modules, the Cold War adventure Border Crossing and the pulpy Adventure of the Jade Jaguar.

Repeat the process and I get issue #229, which I think was after I stopped reading every issue. The random page I get is another ad, this time for Games Day '96 in Baltimore, featuring the Golden Demon Awards. A third set of rolls gets me to the second page of "Playing the Political Game," Mike Beeman's article on political adventures in AD&D, from issue #90. Here's an excerpt from an example Beeman uses:

Lord Valdis von Wodinskirk of Karmagia... sandwiched between the much larger and stronger fiefdom of Luxor and the foreboding Suss Forest. Karmagia’s sole asset was gold--the territory sat on a mother lode--but Valdis could neither entice merchants to Karmagia nor send his own caravans to town because... incessant highway robbery.

So putting this stuff together with a bit of judicious tweaking and a pinch of pixe dust, that plain sword +3 now becomes something like this:

Sword of Valdis: this +3 longsword was reputedly forged in the Second Age by the golden demon Grazzmathax, how it came into the possession of the nobleman Valdis of Karmagia is unclear. He wielded it in numerous border disputes with the Count of Luxor and battles with bandits. Both the sword and Valdis disappeared on an ill-fated expedition to locate the legendary Temple of the Jaguar.

Okay, maybe that's not the "coolest sword ever" as I promised above, but it's certainly better than a +3 and nothing else. For extra funtimes, add Karamgia and Luxor to a corner of your campaign map, sprinkle some rumors about the Temple of the Jaguar about the place, and write up the stats for Golden Demons of the Second Age.

You don't even need a run of Dragon mags or a die roller to use this simple technique. A couple of random pulls from a shelf full of miscellaneous gaming stuff will do the trick.