Each attempt at recruitment costs d6 x 100sp (as suggested in Holmes) but this covers both the costs of the recruitment process and the cost of hiring the NPCs rolled below.  If you come up short on cash (e.g. you roll a 5 and only have 423sp) subtract one from your d6 roll below for each 100sp or fraction thereof you are short.

Unless otherwise indicated, these characters will be 0 level fighters, as per LotFP.  D6 hit points each.

In general the PC will need to supply appropriate equipment, though mercenaries and adventurers have a 2 in 6 chance of possessing some basic gear, a hedge doctor will usually start with a supply of herbs and bandages, a cook will have an apron and ridiculous hat, etc.

Recruited first level adventurers will generally expect a half share of the treasure while mercenaries will expect cash bonuses when rendering extraordinary service, such as fighting horrible inhuman monsters.

Okay, let's talk about the new entries on the chart.  Pack Apes in the Doom of the Jaredites campaign aren't actually primates like they are in HackMaster, rather they are the cureloms of legend, helpbeasts that the Jaredites found and tamed or brought with them from the Old World, where presumably they subsequently went extinct.  The fact that Lord Ahaziel's clan still uses Pack Apes is one of the few pieces of good evidence that he is descended from the last Jaredite king.  Here's what one looks like: 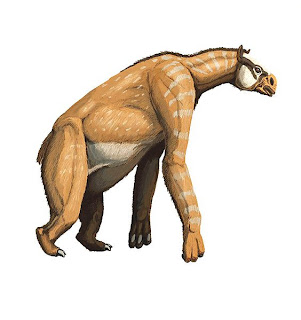 Hunched over like that, a Pack Ape looks shorter humans straight in the eye.  Pack Apes are fairly placid, friendly beasts and as long are you are in a location with plenty of vegetation they will feed themselves by grazing on tall grasses or leaves.

The Lamanites are the people that eventually splinter into the Native American peoples, at least in one common interpretation of Mormon pre-Columbian history.  They are technologically less sophisticated than the Nephites and Mulekites (from which two bloodlines default PCs originate) and in this particular period they have a touch of the Noble Savage attached to them.  That way it'll be a tragedy when the PCs lead these people to their deaths.  Maybe they look like this: 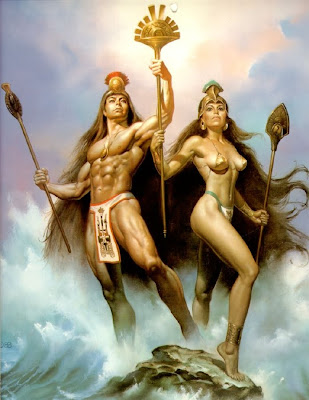