a couple of scans

Up first is a page typed up by my buddy Dave back in the 80's. We got into MERP for a while and he put all the Experience Points charts together. In MERP you get XP for just about anything interesting you do: crits to baddies, travelling overland, casting spells, maneuver rolls, killing monsters, even having a good idea. 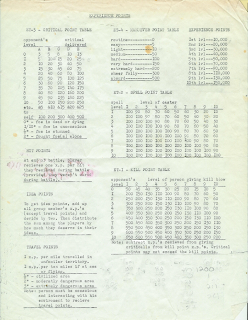 The blank space in the bottom left has some mostly-erased chicken scratched totalling XPs for Tom, Chris, Eric and Colin.  That's all the regulars in my high school game group except Dave and me.  I think the handwriting is mine, so these numbers probably go back to my run of the starter modules in the back of the MERP rulebook or Bree and the Barrow Downs.  Chris ran some sort of warrior who was always scoping out poisons to put on his spear and Eric had an elf tricked out with max Dex, max bow skill, a crossbow and a single mithril-tipped bolt.  Their master plan invariable involved ambushing the monsters, Eric shooting the most dangerous-looking foe and then Chris poisoning the rest of them.  That campaign only ran maybe 4 to 6 sessions, but it was a lot of fun.  The players soured on the game after running into an enemy sorcerer who knew both Spell Store and Fire Ball.  The result was the entire party taking a C heat critical.

The gang murmured about switching games, so like a bastich I ran Call of Cthulhu next.  That actually went well until Chris's big game hunter used a Yuggothian freeze ray on the warp core of Tsathoggua's spaceship.  Dave's professor was the only one to escape the ensuing explosion.  He got away by throwing himself in a river, but then drowned in the rapids.  Good times.

Next up is a page from Steve Jackson's Fantasy Gamer, issue #3 (1984).  I don't have a story here, I just thought folks would dig a one-page character class that focuses on strangling people. 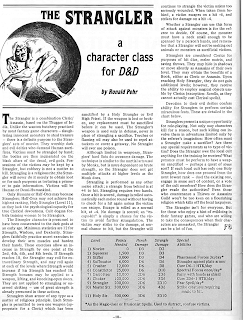