Doom of the Jaredites, session #1

Here's the roster of the first expedition from the Furthest House of Ahaziel:

Moab the Malefactor - a rather dodgy dwarf and organizer of the party
Anak the Nephilim - a diabolic-looking elf
Nehi the Orange - a magic-user escaping persecution among the Nephites, where sorcery is illegal
Goliath the Lesser - a warrior with the proportional strength of his namesake, too bad he's only 5 feet tall

Hearing rumors of a ruined city along the shores of an inland sea to the north somewhere near a waterfall, the party set off in that direction from the Furthest House.  They returned four days later, delighted and rather surprised to be alive.  The wizard Nehi sports a strange double-line scar on the palm of his left hand, but other than that they seem intact.  They spent most of their time hacking their way through tall prairie grasses, but they did find the shores of a large body of fresh water.  You ever try hacking through prairie grass with a dwarf and a shrimpy fighter?  Half the party is invisible for much of the day. 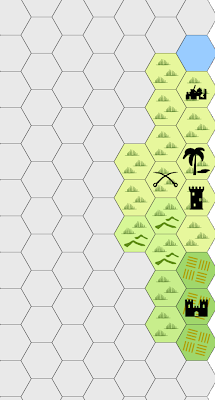 The northernmost "ruined city" icon is actually a small village of maybe iron age technology that has been partially burned down and completely abandoned, unless you count the numerous spiders as inhabitants.  This place does not seem to be the city of the rumors, as it is only a village and no waterfall was found nearby.

The tree two hexes south of that is a rather large, old walnut tree.  Not particularly exciting but there's a small stream of refreshing water nearby and it's on high enough ground to make a good landmark.  The crossed sabres icon is what the party presumes to be an old battlefield, as it's full of bones.  They didn't get too close to that.

The tower is an ancient structure constructed out of megalithic blocks joined without benefit of mortar.  In it the party encountered lethal vines, some sort of undead wielding a magic dagger and a big scary snake.  The latter did its level best to bite Moab right in his little dwarfy face.  And the party nearly encountered some sort of gigantic bird of prey that alighted (alit?) upon the top of the tower.  Later they found a full grown bull elk up there, picked clean of much of its meat.

Treasures brought back included 2 jaguar pelts and three jaguar skulls (earned the hard way, the third pelt was left behind because they hacked up that jaguar badly before it died), an enormous rack of antlers, five red and green feathers each 3' long, a crude copper bracelet with pale greenish-blue stones and a rather nice non-magical longsword with a silver-chased hilt done up with a fairly tasteful skull motif where the cross-guard meets the blade.  If anyone wants the later it's available for 200sp (that's 200gp if you come from a game with a gold standard).

All in all, I thought it was a pretty good start to the campaign.  Nobody struck it rich, but four first level characters got through four days of unforgiving wilderness trekking.  That's pretty impressive.  I'm still getting the hang of the differences between the Lamentations of the Flame Princess rules and BX D&D, but hopefully I'll get better at that.