Giants in the Dying Earth

Once upon a time there was a great gaming magazine called The Dragon, published by a long defunct game company called TSR.  Although its main focus was D&D, in its heyday The Dragon was the definitivee magazine for the entire RPG hobby. Man, those were the days.  During this long-gone golden age there was a regular feature in the mag called "Giants in the Earth".  The title is a Biblical reference, in Genesis chapter 6 these mysterious giants in the earth father a race of half-humans, "the same became mighty men who were of old, men of renown". The articles, which ran from about the mid-twenties to issue fifty-something, as I recall, did not deal with literal giants. Rather they statted up legendary figures from the popular fantasy novels of the era. Nowadays you couldn't get away with that in a legitimate journal, what with our society's growing obsession with intellectual property.  But those were different, weird times.

Anyway, today I wanted to share with you selections from a couple installments in the GitE series, particularly the two instances where Jack Vance's characters are written up in D&D terms.  Since Vancian magic is and pretty much always been a hot button topic in D&D fandom, I find it interesting how some actual Vance characters, and, more importantly, their magical abilities, end up translated into D&D terms.

First up is Cugel the Clever, star of the third book in the Dying Earth series, Cugel's Saga.  He also appears in Eyes of the Overworld, I believe.  I've never read that one.  Cugel's uncredited (probably by Lawrence Schick and/or Tom Moldvay) write-up in The Dragon #26 (June '79) pegs him as a Thief level 14 with 18 Intelligence and Dexterity.  I believe this article might be the first installment and it really sets the high-power standards for the series.  Also in the article is a version of Karl Edward Wagner's Kane, done as a Fighter 30/Magic-User 20/Assassin 14 with 2 eighteens, a seventeen and a nineteen in his stats.  Anyway, dig this neato passage:


Cugel once had access to the notebooks of lucounu, the Laughing Magician, and managed with great effort to memorize three spells. These are: Felojun’s Second Hypnotic Spell (treat as a hold person), Phandaal’s Mantle of Stealth (by which the caster can be neither seen, heard, nor smelled) and Thasdrubel’s Laganetic Transfer (or The Agency of Far Despatch, which places a hold person on the target until a demon comes and carries him away to some specified far land). Unfortunately, Cugel doesn’t always get the spells right and there is a 50% chance that any spell he uses will backfire and cause the opposite of the intended effect. Every time he blows the Laganetic Transfer he himself gets carried away somewhere else, which is probably how he came to the D&D universe in the first place.

Dig those neato spell names.  Cugel's peek at Iocounu's spellbooks is one of the origins of the thiefly Read Scrolls ability, along with similar shenanigans from the Grey Mouser, if I recall correctly.  The other thing to note here is that not only are the spell descriptions super-brief, they have no level assigned to them.  For an oddball NPC thief that may or may not even have these spells in memory when encountered, this isn't exactly a big deal.  But I always look at articles like this for things to steal for my campaign, so as a kid this lack of detail annoyed me. 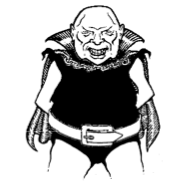 Issue #29 follows up with stats for Iucounu the Laughing Magician himself.  This wee git is represented by Lawrence Schick and Tom Moldvay as an MU 20 with an Int 18.  More importantly, despite his level he will only know five spells when encountered, rolled up from the following kickass chart:


1-2: The Charm of Forlorn Encystment: this is the same in all respects as the 9th level magic-user’s spell imprisonment.

3: The Charm of Untiring Nourishment: by speaking this charm, the magic-user need not breathe, eat or drink while the spell lasts. Duration: 1 turn/level. Casting time: 2 segments.

4-5: The Excellent Prismatic Spray: This is the same as the illusionist’s 7th level spell in all respects save casting time, which is only 3 segments.

7: Gilgad’s Instantaneous Galvanic Thrust or the Instantaneous  Electric Effort: this is the same as a lightning bolt in all respects save  casting time, which is only 1 segment.

8: Houlart’s Blue Extractive: this spell is used to remove a being from its refuge or concealment. If the target fails to save, it will simply fly from its hiding place and land at the feet of the caster. Any being so treated will be stunned for 2-12 rounds. Range: 1”/level. Casting time: 5 rounds. Saving throw: neg.

9: Houlart’s Visceral Pang: the recipient of this spell will be totally incapacitated by excruciating pains in the abdomen for 1-3 rounds. Range: 9”. Area of effect: 1 creature. Casting time: 2 segments. Saving throw: none.

10: Lugwiler’s Dismal Itch: the recipient of this spell is cursed with a continual itching over every square inch of his or her epidermis. When in this condition, armor class is two levels worse, all fighting is done at -5, and spell use is impossible. Range: 6”. Duration: until dispelled (remove curse will also work.) Area of effect: 1 creature. Casting time: 3 segments. Saving throw: neg.

11: Phandaal’s Critique of the Chill: this is the same as the cone of cold spell in all respects save casting time, which is only 3 segments.

12: Phandaal’s Gyrator: the unfortunate target of this spell is levitated into the air and spun about at any speed the caster desires. At the fastest possible rate of spin, the spinner will take 10 hit points of damage per round due to the centrifugal forces involved. Controlling the spell requires great concentration on the part of the caster. If the concentration is broken, the spell dissipates. Range: 6”. Duration: 1 round/level.  Area of effect: 1 creature. Casting time: 5 segments. Saving throw: none.

13-14: Phandaal’s Mantle of Stealth: the caster of this spell is rendered invisible, inaudible and odorless; virtually indetectable save to true seeing, a robe of eyes or a gem of seeing (and touch). Any attempts at offensive action on the part of the recipient instantly negate the spell (as with invisibility). Duration: 1 round/level. Area of effect: creature touched. Casting time: 2 segments.

15: Rhialto’s Green Turmoil: the recipient of this spell is overcome with a violent nausea which totally incapacitates him or her for 2-20 rounds. Range: 5”. Area of effect: 1 creature. Casting time: 2 segments. Saving throw: neg.

16: Spell of the Macroid Toe: in this specialized polymorph spell, the big toe (or similar extremity) of the creature affected grows to the size of a small house. Range: 4”. Duration: until dispelled. Casting time: 4 segments. Saving throw: neg.

17: Spell of the Omnipotent Sphere: this combines the effects of the magic-user’s spell anti-magic shell with those of a cube of force. It is a near-total (but non-mobile) protection for the caster. Duration: 1 round/level. Area of effect: 10’ diameter sphere. Casting time: 9 segments.

18: Spell of the Slow Hour: this spell is similar to the magic-user’s spell, slow, except that it is twice as efficient, and slows the affected creatures to one-quarter the normal or current rate. In all other respects (range, duration, etc.) it is the same.

20: Thasdrubel’s Laganetic Transfer or the Agency of Far Despatch: when this spell is uttered, the recipient is bound as if by a hold person spell. A nycadaemon appears (i.e., is gated in), grasps the held recipient and flies him or her either to a point designated by the caster or 10-100 miles in a random direction. Range: 3”. Area of effect: 1 creature. Casting time: 1 round. Saving throw: none.

This part of the article was obviously written by Law Schick, as that guy is the only person I ever heard of who ever really cared about segments of action.  Well, maybe Len Lakofka liked 'em, too.

Some, off the top of my head uses for the chart:
Any other ideas?