Back in the day,"Small Ads" was the classifieds section of White Dwarf magazine.  This was back when WD was a general gaming mag.  I don't know if they still put classifieds in the all-GW version nowadays.  The Small Ads ranged from zines and modules from garage outfits, players looking for players (include quite a few painfully obvious 'looking for a D&D girlfriend' ads), clubs announcing meeting times, people looking to buy, sell or swap game crap and help wanted ads for game companies.  A minority of the Small Ads were written in-character, including a few that were obviously campaign communiques from one character to another.

I've lightly edited the 55 most interesting in-character ads and listed them below.  Perhaps the PCs in your campaign could find some of these items posted on the wall of a tavern.  Some will need a little editing, as I left in a few place-names and an occasional mention of a ruleset.  And dates or contact info will need to be added to make some of these work.
Pretty cool, huh?  There's scads of adventure hooks and NPC concepts in these tiny items.

Finally, here's a scan of my favorite gaming club listing, with the contact info clipped. 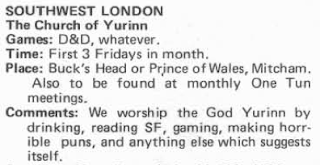 I may have to use the Church of Yurinn in a campaign sometime.