After some godsawful dungeon delve you pull into your usual watering hole.  There's a couple of new guys at the bar.  One, a stock third-rate greybeard wizard in a shabby robe, is already draped over the bar half asleep.  The other is a towheaded, Shaggy-bearded kid of a fighter.  They look like any two dungeon losers you'd find guzzling cheap ale in a thousand places like this across the multiverse, except for the lizard.  Floating in the air above the kid's right shoulder is a weird chameleon-looking critter, maybe about 2 feet long from nose to tail.

This kid seems friendly enough and he offers to buy the first round, so you join him.

"There's some weird caves in Outland just a couple miles west of the last imperial outpost, just past the southern woods.  If head down the old road and end up at Blackmire Village you've gone to far.

"Anyway, my buddy Stan here," he gestures towards the nearly unconscious mage, "and I joined up with this group of adventurers.  It was one of those classic full-blown fellowships really.  We had the infamous Blixa and his talking dog Abe, a goblin named Ozzy Sweetleaf, the green-haird alchemist Sampson, a pirate named Plissken, a tanner from Hell, a weird birdguy named Scarecrow who has jedi powers and a dwarf.  Stan, what was the dwarf's name?"

He pokes the wizard a bit.

"Thanks.  Like I said, a big party.  We just needed a magic ring and some hobbits and we'd have a blockbuster.  So we decide to visit this cave high up on a ledge.  What was the name of the cave, Stan?"

Stan ruffles through a few sheets of stained and torn paper and does his best to focus his besotted eyes on the scribblings written thereon.

"The Mysterious Cave of Epsilon!" he proudly declares.

"So that's where we find this guy, just past the chamber with the upside down pointy snails. Watch out for those if you ever visit the place. The northern passage out of that cavern leads to where we found Elford.  We never explored past that point, so there might be treasure down that way.  I don't know. I think we cleared the rest of the Epsilon cave.

"Elford can communicate telepathetically, but only speaks to me for some reason.  He directed us to some treasure.  I think rather than eating bugs and stuff like a normal lizard, he puh-sigh-chick-uh-lee feeds on the cheap thrills of following adventurers around.  He led us to a chest made out of some magical zappy metal-" 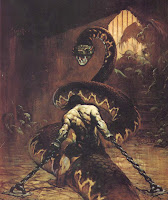 "-in a room full of orange-glowing fireflies.  Watch out for those.  They tend to explode.  Our bird buddy thought he'd snack on one of them and nearly blew his face clean off! Elford also showed us the way to a room with an altar built to some sort of devil lady.  There we fought a bigass snake and defeated a poison gas trap. The snake wrapped around me at one point and squeezed so hard I thought my eyes would pop out of my skull.

"So when I first met Elford he offered me a deal that if he could follow me on adventures for a full week, he would give me the ruby that grows in his head.  But at one point Scarecrow used his jedi powers to pull it out and ruined the gem.  I don't really hold it against the guy.  It must be tough going through life as a bird man.  Being hunted by Darth Vader can't help either.  And Elford here does seem to be of the party of the Devil, so stealing from him isn't really a sin, I reckon. So now Elford is stuck with me until his ruby regrows and he can pay me as agreed.  A deal's a deal.

"I may have to go back to those weird caves some day.  On the way to Epsilon we spotted a witch or an amazon or something cavorting topless near the pond.  Girls don't dress that way where I'm from.

"Anyway, your turn to buy a round."