every campaign needs one 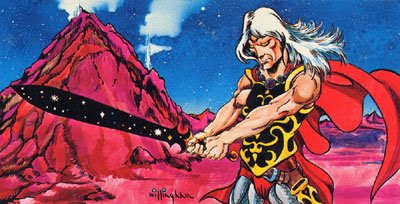 Few Haunted Swords have such a lengthy history of woe as the blade called the Sword of Unyielding Doom. To bear any Haunted Sword is a dangerous undertaking, but only the mighty and clever can lay their hand on the hilt of Unyielding Doom and live to tell the tale. The Common Tongue name of the sword is one possible translation of the dwarvish name for the blade, Makaz Grimdum. The same phrase could also be read as the Tool of Harsh Darkness. Elven legends refer to the weapon as Úqua Yontamorë, or "Greatest Darkness". The Adelians call it Nænne Mæzz Swaarz, a translation of the elven name into their own tongue.

All sources agree that Unyielding Doom is a broad-bladed sword of some dark substance. Grezerek, the curmudgeonly Sage of Hautville, insists that it must be forged of Greater Obsidian. Grezerek cites as evidence that the blade's earliest recorded usage was in the hands of Ortong the Searer, one of the Lava Lords who purportedly knew the secret of strengthening mundane obsidian until it surpasses steel in all properties.

The goblin-minstrel Kreblek Twelve-Fingers suggests an intriguing alternative. Kreblek composed a series of songs detailing some of the tragic history of Unyielding Doom. The third in the series contains two stanzas flashing back to the creation of the blade. They suggest that the sword was forged during the First Elvish War and that the blade is composed of the secret dwarf-metal oldrakk. At some point or another nearly every legendary magic item is attributed to the First Elvish War, but it is a bold claim to suggest that an elf-smith worked with oldrakk. Though the mythical dwarf-metal is supposed to be as black as an underground eclipse, some bards note that the best explanation for Kreblek's attribution is that the word "oldrakk" fit his rhyming scheme better than the alternatives.

Unlike the Ninny, most authorities on the matter agree as to the known powers of Unyielding Doom. When the blade is held in both hands no cold can affect the bearer, as when the infamous Sir Tergoth turned aside the arctic breath of the ice dragon Umgarn. Occasionally it will leap into the hand of its owner when danger is near, such as the time it came to the instant defense of the third Dwarf-Lord of the Seven Hills when his uncles rebelled against his harsh rule.

But foremost is the blade's ability to cut your soul as easily as it slices your flesh. The shattered spirits of those slain both body and soul are trapped within the blade, and the whispers of the dead can be heard by the wielder. These undead voices can lead Unyielding Doom's owner to great treasure. Other times they trick the poor fool, often leading to a grisly end.