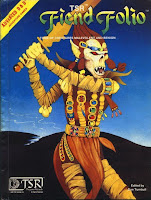 Time to see who rules the roost in one of my alltime favorite monster books. Again, I'm omitting unique creatures because it's non-controversial that Lolth is one tough cookie.

The Enveloper has no upper limit to its hit dice. A truly ancient Enveloper could easily be the most badass monster in your FF-powered gameworld. That would be even weirder than the Hundred Headed Hydra that stomps around the Holmes Basicverse. More than once I've argued for the ultimate awesomeness of a world where the Fiend Folio is the primary monster book. And looking at the scant list above I'm actually kinda leaning towards the idea that the FF better fits with the 3 Little Beige Books than the Monster Manual. What would a game world look like where the original daemons and the slaad were the primary extraplanar foes? A world where the Eye of Fear & Flame was the number one undead baddie? Where people feared fogbanks because they might contain the mightiest of giants? Sounds pretty effin' cool to me. Maybe it's time to put my money where my mouth is and use the FF (but not the MM) for the World of Cinder. Though I may have to keep Taylor's suggestion in the last post for dino-riding titans. That's too rad to ignore.