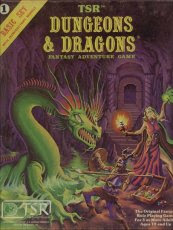 Using the word "iconic" to describe the exemplar characters for D&D is a new phenomenon. I hadn't heard term until 3E, with its more brand-savvy approach. But D&D had signature characters right from the very start, they just weren't branded as heavily as nowadays with their own novels and what all. The '81 Basic D&D Set that I started with had its own share of named characters, but head and shoulders above the rest stood Morgan Ironwolf.

Morgan appears in the text three times over the course of the 64 page rulebook, more than any other character. We first encounter her on page B13, where she is the character generation example. I absolutely love how the first 13 steps of chargen outline the creation of a classic butt-kicking high Strength/Dex/Con, low Int/Wis/Cha fighter. And only in the last step do we get this:

That's gender equality, Dungeons & Dragons style. It should be noted that this version of D&D lacks the penalties on female Strength that Gygax would be so rightly lambasted for in AD&D. Incidentally, I can't help but wonder if Morgan's last name was inspired by the Howard Chaykin character of the same name, who appeared in DC's Weird Worlds in the early 70s. Whatever the origin of the name, Morgan Ironwolf remains one of the coolest PC monikers in the history of the hobby.

On the page following the chargen example we get a complete character sheet filled out for Ms. Ironwolf. Click the teeny one below to see it in all it's glory.

Then on page 20 we're treated to this very excellent Jeff Dee illo of Our Heroine. 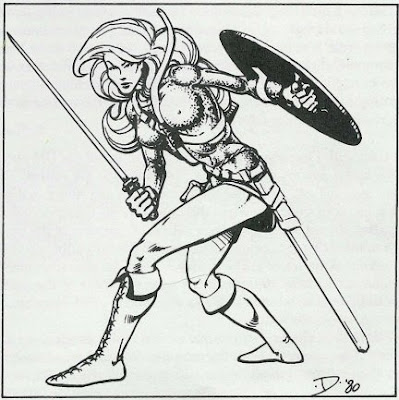 Okay, there's really nothing that proves that this picture is meant to be Morgan Ironwolf. The equipment she carries matches the chargen information and as kids that was all we needed to make the connection. As a grown man it strikes me as sexist to assume that the one female warrior illo simply has to be the only female fighter in the text, as if there couldn't be two female fighters in the world. But as a kid I was just looking for ways of making sense of the totality of the rulebook. As a result, that pic will always be Morgan Ironwolf to me. I have no doubt that Dragonsfoot is chock full of people my age who came to the same conclusion.

Morgan appears two more times in the text. On B28 the sample combat features her and her friends Silverleaf (an elf, of course), Fredrik (a dwarf), and the cleric Sister Rebecca. Morgan makes a good accounting of herself, killing one hobgoblin with an arrow shot and another with swordplay. She's wounded in the battle and wants to kill some hobgobbo prisoners, but Sister Rebecca threatens to get stingy with the cure light wounds should the the wretches be harmed. Those Lawful clerics can be a real pain in the ass sometimes.

The general example of play also features Morgan Ironwolf and the same cast as previous, joined for a while by Black Dougal the thief. I say 'a while' because he blows finding a poison needle trap and dies during the example of play. It has nothing to do with Morgan Ironwolf, but I absolutely adore this exchange:

DM: Black Dougal gasps 'Poison!' and falls to the floor. He looks dead.
Fredrik: I'm grabbing his pack to carry treasure in.

Damn, that is cold. The dwarf doesn't even confirm the dude is dead before he starts vulturing his stuff.

In the example of play the standout thing about Morgan is that her player (who we know is female) is the caller. No one I know has had a formal party caller in 20 years, but back in the day it was the most important player position. Much player-to-DM communication was filtered through the caller, who was tasked with speaking for the party as a whole. In my experience the caller was the de facto leader of the party.

So that's Morgan Ironwolf in a nutshell. As far as I know she's never appeared again in a game product. If you know otherwise, please clue me in.