In issue 24 of his book, Rom teams up with Nova to defeat some Skrulls, who are attempting to conquer the planet Xandar. Rom fights the Skrulls alone while Nova, an Earth kid with Xandarian superpowers, seeks to free the Champions of Xandar from imprisonment. Things look desperate for Rom, but the local populace decides they aren't going down without a fight. 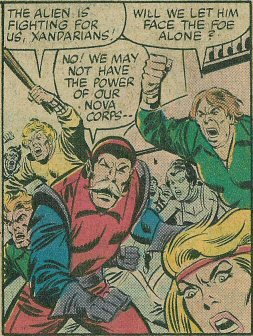 Holy crap, but that old guy with the mustache is awesome! And the eyebrows! And the outfit! Why this guy doesn't have his own 12-issue miniseries is beyond me. It's a tragedy that his only appearance in the mag is this one panel. This unnamed Xandarian reminds me of half the oldsters in my Masonic lodge: tough as leather and not taking any crap from the likes of you!

In fact, I so dig this dude that he served as the inspiration for the first fully statted character in New Bronze City!

Contacts: Space Geezer is on good terms with many of the old guard of the Zandarian Space Corps. Locally he has limited but friendly contact with the Zandarian Embassy to the UN.

Inhuman Grumpiness: Once per day Space Geezer may attempt a Psyche FEAT to enter a fit of righteous fury, boosting his physical abilities for 1-10 rounds. A red result boosts his Fighting, Agility, Strength, and Endurance by two ranks. A yellow result boosts the same stats one rank. After the period of enhancement all of Space Geezer's physical abilities drop to one rank below normal for 1-10 minutes. A green result boosts a physical stat of Space Geezer's choice by one rank, but with no subsequent rank reduction. If the Psyche FEAT yields a white result nothing happens but Space Geezer cannot attempt further Grumpiness for 1-5 hours.

Ultrium Swagger Stick: Space Geezer occasionally carries a metal cane of alien design. It is made of an unearthly alloy of Amazing material strength. When wielding it in hand-to-hand combat Space Geezer does +1 rank of damage. The head of the cane contains a laser emitter capable of doing Excellent damage at a range of 4 areas. The power of the laser is variable and can be turned down so as to light cigars or toast bread.

Gee-Zar served 8 terms with the Space Corps, the mighty military machine of the Zandarian Star Empire. He's seen fighting all over space, participating in most of the colonial wars of the last three decades. When Sergeant Major Gee-Zar reached mandatory retirement age he pulled a few lucrative mercenary tickets and then opted to settle down on a shiny little planet outside of the major interstellar trouble areas. His pension keeps him very comfortable on this backwater world and his only trouble's nowadays is the occasional local hooligan in need of a drubbing. And frankly, Gee-Zar enjoys the workout.

Incidentally, if you look back up at that panel you'll see that old guy's left fist is behind the blonde woman in the foreground. But there's a second purple gloved fist on the left side of his body, completely visible. I think the penciller intended the visible fist to belong to the dude to the left, the guy in the green. The colorist's decision to make that guy's fist purple confuses the image and almost makes it look like the elderly gent with the mustache has two left arms. That confusion actually worked to my advantage when I tried pulling the old guy out of the panel with a paint program.

Yeah, I'm digging up a year old meme here, all for a character I just made up. I have no shame.