the PCs are big meanies

I was expecting them to kill all my Mutant Half-Dragon Cycloptic Huge Monstrous Spiders, even though that Mutant template I found on the internet was utterly broken. My lovely spiders were built like tanks: eggshells with hammers. But then they killed my dragon. And not just any dragon either. Ladies and gentlemen, I give you... 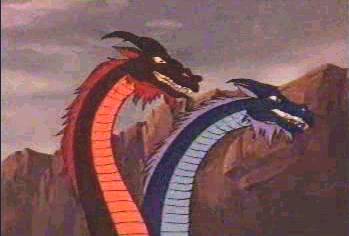 the Two-Headed Half-Dragon Tarrasque!!!
For weeks now I have been looking forward to mauling them with this bad boy. But the gith monk went and ruined that. He went first on round one, tumbled up next to the dragon, and nailed him with a stunning fist. I rolled a '1' for the save, the only number that would have allowed the stun effect. This blown save cleared the way for the rest of the PCs to close to ass-whomping range without drawing attacks of opportunity. My poor little CR27 baddie with almost a thousand hitpoints never even got a chance to attack once. *sniff*

Next run, we kick off the final arc of this campaign: Greypocalypse Now!