In a comment to the previous post the good Dr. Rotwang asked about the physical book itself that I am using for my new campaign journal. I found it in the blank books section of my local Borders and it is produced by a British stationery company called Paperchase. It measures 6 inches by 8 inches, with 300 pages making the book approximately an inch and a quarter thick. The grid is 6 squares to an inch, which is smaller than I like. But since the paper is small than usual I think it will do. The exterior is a softbound faux leather. It weighs enough to have a sense of heft to it, but doesn't seem an undue burden. I'm pretty sure this journal and the two '81 rulesbooks are still lighter than the 3.5 corebooks.

Here's what it looks like, sitting on the computer desk in front of me, with the rulebooks present for scale (and because they're awesome): 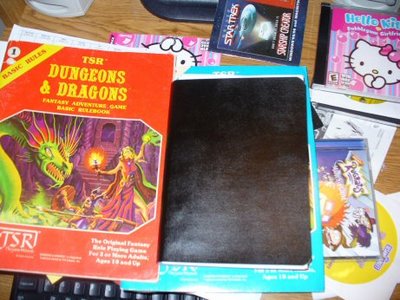 And here's a close-up of part of my second entry: 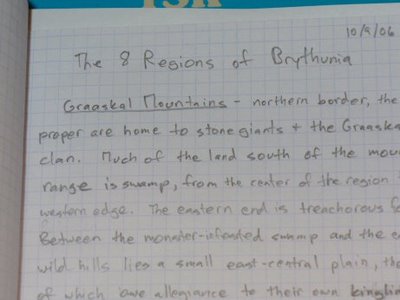 As a starting point for a map I'm using a close-up of Brythunia as it appears on this map, which I believe is from the old Hyborian Wars play-by-mail game. But my campaign isn't going to be a Hyborian setting in any purist sense. All I'm attempting here is a kitchen sink D&D setting with a different Howard to Tolkien ratio.