I had a large group last night with 6 PCs (two elves, a dwarf, a cleric, a fighter and a thief) and 4 miscellaneous hangers-on (a cook, a halfling, a hopeless loser and some guy with a crossbow).  The party made several ventures into the Wet Cave, cleverly avoiding drowning by paying strict attention to the tides.  I thought I was going to be able to kill them all when they started acting like "clearing the level" was their primary goal.  There's nothing wrong with wanting to kill all the monsters.  But unless you need to secure your flanks or maintain an open path of retreat, there's no real upside to attacking dangerous critters that don't have any treasure.  "Let's kill these guys just because they're there" is damn fool way to die in the dungeon.
﻿
﻿
But the real highlight of the night was the capture of Blue Nellie.  Not everyone playing knows about Blue Nellie, but at least a few of the Friday 4am PCs have encountered this large (4' long or so) blue lobster.  About mid-morning most days it scuttles its way into the wet cave, exiting around sundown.  A few people even managed to figure out that Blue Nellie was intelligent and possibly cursed.  Until last night Celumir the Bald, an elf in the Friday morning PC pool, probably knew more about Blue Nellie than anyone, researching the legend, interviewing local fishermen, etc.  He already knew what last night's bunch didn't figure out until they were well on there way towards planning a big lobster boil at the abbey guesthouse.

Centuries ago the evil wizard Myrddin used the caves that now bear his name to try to sneak an army of monsters into the catacombs below Castle Dundagel, in hopes of catching the forces of good Queen Morgana unawares.  A local sea elf named Cerellia tried to swim up the wet cave to find a way to warn the queen, but she was captured by the bad guys.  To punish her, Myrddin cast polymorph other and geas upon her, dooming her to centuries of attempting to finish her mission while in the form of a giant blue lobster.  What Myrddin knew and Cerellia didn't is that the Wet Cave has no easy connection to the rest of the Dundagel complex.  The PCs found her in the dungeon trying to dig a tunnel through the stone wall with her lobster claws.

After figuring out that Blue Nellie was cursed in some way, it took the Abbot throwing remove curse teaming up with the local Witch, who cast dispel magic.  Here's the true form of Blue Nellie/Cerellia the Sea Elf. 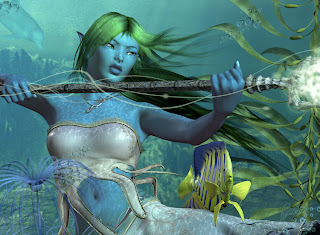 Fiendish bastard that I am, I was really hoping that last night's group didn't figure this out and the lobster stew went ahead as planned.  It would have been fun to describe a bald elf coming into the feast, figuring out what happend, puking his guts out and running away in sheer horror.﻿