an interesting item from EPT 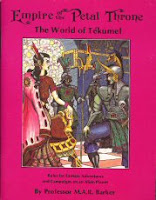 I was rereading Empire of the Petal Throne this afternoon when found this interesting entry in the magic-user spell section:

16. Research: A player may elect to perform the research necessary to develop a new spell. The inclusion of this in the game is at the referee's option, and all of its features must be clearly specified. The referee will determine the length of time needed to develop the spell and perhaps a percentile dice roll required to achieve success; these factors will depend upon the power and difficulty of the proposed spell. No such research can be done, however, unless this bonus spell is chosen from the Group III list.

What we have here is the EPT spell research rules embedded directly in the spell list.  All the bonus spells (as opposed to magics all MUs of a certain level or higher can cast) are rated group I to group III, so I tend to think of each group as roughly equivalent to two D&D spell levels.  Only it's more complicated than that.  Because acquiring bonus spells involves throwing dice, you can acquire a group III spell as early as your PC's 4th level or possibly never (though your chance at 11th level is 80%).  Also, the group III spells don't exactly map to 5th and 6th level spells.  Wish, for example, is on the group III list.

Anyway, I'm really digging on this implementation of spell research.  It largely preserves the Vancian concept of spells as post-apocalyptic remnants.  Most magic-users work within the framework of the small list of known magics, presumably left over remnants from the Age When Everything Was Super Awesome.

But Research leaves a back door open for new magic-as-progressive-science type spells to sneak back into the setting. Note that under this system spell research only enters play via magic-users who are both particularly successful and particularly obsessed, since to use this option you have to reach a decent level and be crazy enough to pass on Wish or The Demon spell or The Silver Halo of Soul Stealing or any of a number of other totally kickass spells.

It would be a snap to incorporate a similar mechanic into D&D.  And if you wanted to keep spell research away from the grubby paws of the elves, all you have to do is make Research a sixth level spell.