Over on Wikipedia I found a cool map by Ortelius, one of the greats of cartography, showing the voyage of Jason and the Argonauts.  You can see the whole map in all its glory here.  I found two bits particularly interesting. 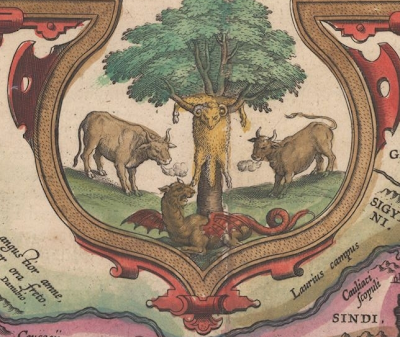 I love, love, love inset illos like this on maps.  Game cartographers take note!  I think the colorist dropped the ball on those bulls, as they're probably supposed to have bronze hooves and mouths and that smoke should look more fiery.  Those guy are almost certainly the kick-ass robo-bulls that Hephaestus made for King Aeetes.

That dragon is pretty wild.  Here's a close-up:

Head of a wildcat, wings of a bat, tail of a serpent, body of camel.  That's classic heraldry-based monster design right there!

The other detail I'm digging on is this tiny larger-scale map in the corner: 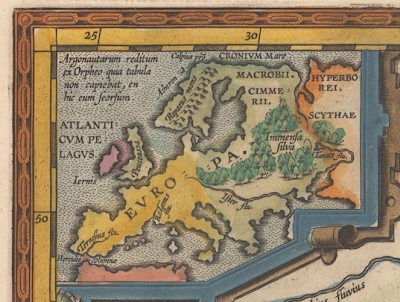 Lots of great stuff going on here:  If you didn't know better you might conclude that Evro and Pa were neighboring realms.  Conan the Barbarian comes from the land just north of the Immense Forest.  And Great Britain is call Peuceassa.  I don't think I've ever heard that one before.  I think Ortelius was Dutch, so maybe that's where the name comes from?