My camera pooped out on me, so I only have stills today.  I got a little video with my wife's camera, but I haven't had time to review it yet.  Anyway, here's some info on GaryCon III, which I visited for a while on Saturday. 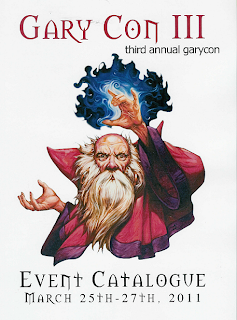 I dig this program cover. 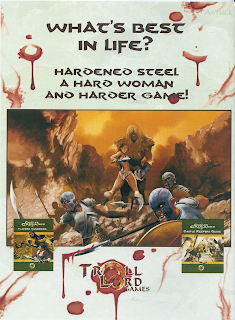 This Troll Lords ad from the inside cover of the program perplexes me a bit.  I enjoy pictures of hot fantasy ladytypes as much as the next straight dude, but in the far future world of 2011 it's really odd to see the male gaze feature so prominently in both the illo and the ad copy.  And C&C doesn't really fit any definition of "harder" that I can think of.  It strikes me as a legit middle-of-the-road option in many ways.  Advertising, what can you do? 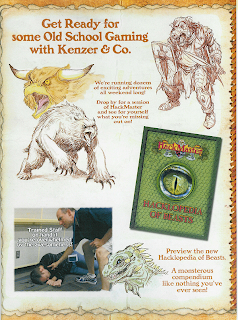 Kenzer, on the other hand, seems to have this stuff down pat.  Here's some monsters, here's a cover of our monster book.  And look how awesome we are: 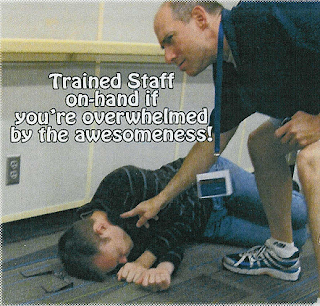 One of things I wanted to do at GaryCon this year was to get in on one of the HackMaster 5 demos being run this weekend.  I own the basic rulebook but it strike me as the sort of game that maybe runs slicker than it reads.  But when I got close to one of the tables I saw them plotting out movement on a one inch:five foot tactical grid and all interest in the system immediately left me. 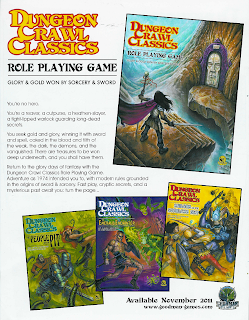 The other game I wanted to check out this weekend was the forthcoming Dungeon Crawl Classics rpg.  "Glory & Gold Won by Sorcery & Sword" is a great new tagline for this game.  And check out the covers of the modules.  Somebody has been going over old editions of books listed in Appendix N, because those babies just screen "lurid 70's fantasy".  Here's a close-up of my favorite: 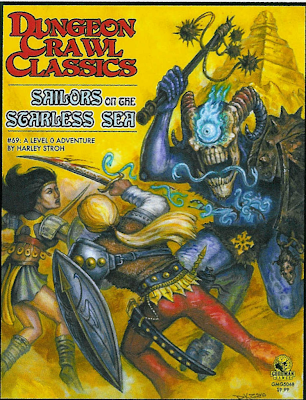 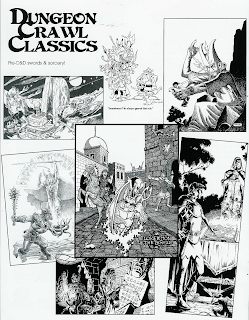 The DCCrpg ad was a flier rather than part of the program book.  Above is the flip side.
So I got into one of the DCC demos again and I am totally digging the way this game is shaping up.  Here are some of the handouts I got: 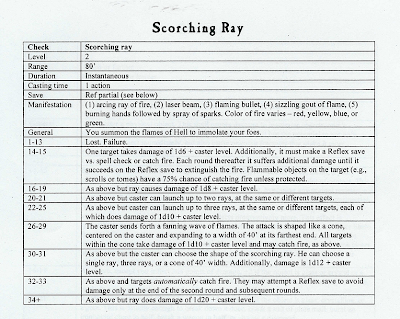 The spell charts are possibly both the best and worst part of the system.  On the one hand I found using them to be a ton o' fun.  On the other hand, I kept imagining how newbie unfriendly they could be.  And will there be a separate spellbook?  My 3rd level MU (see below) needed like 8 pages of these charts just to do his wizardly job.  Still, the results in play were pretty dang awesome. 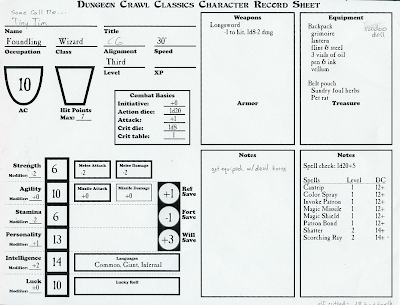 So above is my guy from the demo run by Harley Stroh, author of the module with the awesome eyeball monster up above.  The other players included Michael Shorten, the Chicago Wiz.  It was great to see him again.  He's a hoot to game with.  He was playing an elf wizard-astrologer he names Carls Agan.  At one point he took a crit that resulted in "+d8 damage and loss of that many teeth", which tells me everything I need to know about this game's critical hit system.  For the rest of the game Mike said all his in-character lines with a mushmouth.  Meanwhile I got a natural one on a spellcasting rolls, which sent me to some sort of totally metal Magic Corruption chart, resulting in my poor orphan-wizard growing a pair of horns.

My favorite incident of the game came early on.  Jim Skach brought his two kids to the con (ages 9 and 11 or so) and all three were playing.  These two kids were really fun.  The whole party was traversing an iceflow when a monster errupted up from the water below, wildly tilting the ice.  Jim's daughter immediately announces that her big strong warrior is jamming her spear into the ice and holding on.  My puny little wizard is standing right behind her, so I tell the GM as I fall over I'm grabbing onto the warrior.

GM: Tiny Tim, you're hanging onto the boot of Christina the Warrior for dear life.  Christina, what do you do?

Christina: I take off my boot.

Stone.  Cold.  I end up sliding down almost to the water.  Meanwhile another PC is already drowning but I can't quite reach him, so I use the boot.  "Here grab this boot."  Unfortunately, that guy is too heavy for my Str 6 MU to pull out, instead he pulls me in.  Mike has help both of us out.  Good times. 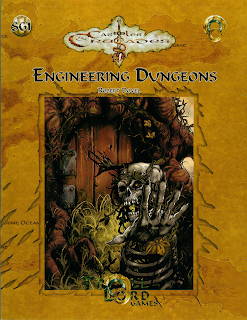 The vendors included Troll Lord Games, Black Blade Publishing and Kenzer & Co.  I only bought three things.  Black Blade was selling these great pads of graph and hex paper.  At the moment I don't know the exact dimensions but they're bigger than standard 8.5" x 11" so I could not resist.  I got the above book from the Troll Lords.  It's 28 pages of random dungeon stocking charts and advice.  I probably don't need another set of random dungeon charts and the advice is clearly aimed at novice DMs, but it was only seven bucks.