On Monday I ginned up a little post about copying new spells into spellbooks in AD&D.  In it I mentioned the write spell, which is used for copying spells you don't yet understand.  One of the things that has always bugged me about that spell is the note in the DMG about finding the special ink required.  The rule Gygax gives is that every apothecary or alchemist in a town has a 10% chance having it in stock.  Those same business have a 20% chance if located in a city.  The part that grinds my gears is that there's no suggestion given for how many of those places one can find in a typical burg.

Sure, you can come up with this sort of thing on your own, whether by fiat ("The city of Mauvecrow has 6 apothecaries and two alchemists.") or by some rule of thumb ("Every town has d6-1 apothecaries and d4-2 alchemists, cities have d6/d4 respectively").  But I thought this would be an opportunity to break out some of my favorite city-stocking materials to see what they say about the subject.

My first stop is a classic article by S. John Ross that every DM should read, "Medieval Demographics Made Easy".  It does exactly what it says on the tin.  Apothecary and alchemist aren't on S. John's list of business, but magic shops of the "get yer spellbooks & components here" variety are.  That sounds like a great place to get write-compatible ink.  In fact, I'd probably give such an establishment double the listed chances of stocking what is needed.  S. John rates magic shops at 1:2800 inhabitants, so all you need to do is take the population of your town or city and divide by 2800.  That will probably get you some whole number and a decimal fraction.  Roll the decimal fraction as percentage dice to see if there's one more shop than the whole number indicates and you're good to go.  So a village of 500 inhabitants has a 17% chance of including a magic shop among its businesses, while a town of 8,000 souls would have 2 magic shops for sure and an 86% chance of a third.  Ross gives ratios like this for a whole crapload of businesses.

Next up is the Midkemia Press classic Cities.  If you like crunching numbers like I'm doing in this article, track down this bad boy.  It also has some groovy wandering city encounter charts and a section that's kinda like the Pendragon Winter Phase for down-and-dirty fantasy gaming.  Apothecaries aren't listed in Cities, but alchemists are.  Giving the chance of finding an alchemist in a settlement of less than 1,300 people involves dice and chart look-ups, but for larger communities it's just a math formula.  There's a little wiggle room here, as many constants in the formula are actually narrow ranges, but I'll skip the fiddly bits and tell you that the basic answer is that for any town above 1,300 in populace Cities suggests one alchemist per 800 people.

That's a lot of friggin' alchemists if you go in for larger cities in your setting.  Personally, I think that would work just fine as a ratio for apothecaries if your campaign world has city populations in the tens of thousands.  Or you could run with that number and suddenly there's a good explanation for why your world has so much of the shiny yellow stuff: alchemical goldfarmers! 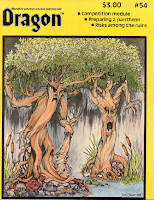 Back when I was a kid I did not have access to either of the above resources, so I relied instead on an article from Dragon #54 entitled "Ruins: Rotted & risky - but rewarding" by Arn Ashleigh Parker (who had a few other articles in Dragon, according to this rpg.net database entry).  "Ruins" also appeared in Best of Dragon volume V.  Parker's article focuses mostly on adventuring through ruined cities, but I found this table very useful for the non-ruined variety of urban area: 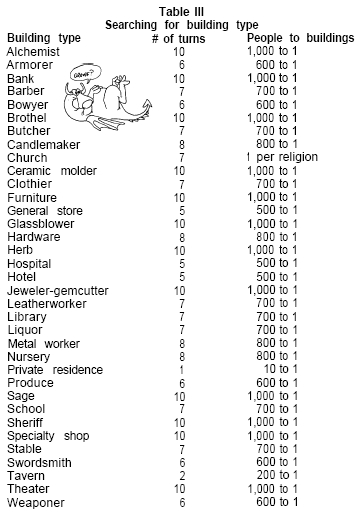 Again no apothecaries!  I guess no one remembered that Gygax specified them as part of the implied setting of AD&D.  The 1000:1 ratio for alchemists is pretty close to the Cities number, so I guess Parker also likes having plenty of potion-mongers around.

Anybody else have a go-to resource for this sort of thing?  Am I the only one who thinks the latter two include way too many dang alchemists?  Does anybody actually buy write ink at apothecaries?