Ascension: Chronicle of the Godslayer microreview 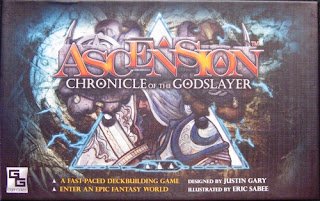 Today I played Ascension: Chronicle of the Godslayer with my sister Jenn.  She whupped me of course.  Anyway, if you dig the deckbuilding-without-collectibility aspect of Dominion, this is the same sort of thing with two key differences:

1) You don't have to thing as hard about what order you do things in when your turn comes up.  You can pretty much but not quite show all your cards and figure out what happens simultaneously.

2) The theme is fantasy heroes beating up weird monsters.

When I was a kid I was a sucker for anything involving monsters, but nowadays one can be picky/choosy and insist on good mechanics too.  Ascension delivers on both a good theme (with cool art) and some interesting mechanics.  One amusing detail is that if there are no monsters on the main field of play then your heroes can always go beat up crazy cultists for minimal points.  Death to all fanatics!

The only thing I don't like about it is that there's no real sense of urgency in fighting the monsters.  Victory is basically a race to win more glory by defeating more badguys.  If there was a provision in the rules whereby the monsters could win the game (and all the players lose) that would add some juice.  You know, like Arkham Horror ot Betrayal on the House on the Hill.  I think Republic of Rome had the same basic idea, with Hannibal standing in for the monsters.  The old GDW card game Red Empire also had a neat "everybody loses" mechanic: the game ends with no winner if you spent too much time skulldugging the other players and ignored governance.