I don't own any of the books for Wizards' new edition of D&D.  I don't plan on getting them and I don't plan on running or playing it.  But I do have a campaign idea that I think would work better for 4e than the versions I prefer, so I thought I'd share.


The basic deal is that I would set the campaign in Jack Kirby's Fourth World.  The PCs would be adventurous young lads and lasses from Supertown, the floating techno-capital of New Genesis. 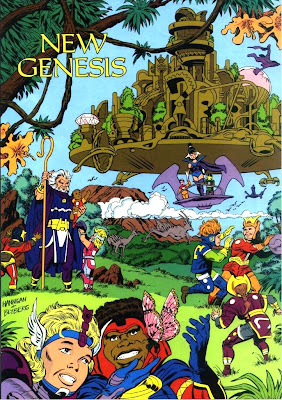 Phase one of the campaign would center around the Bug Mounds, strange underground edifices in habited by hyper-evolved monster people.  Agents of Darkseid have turned the class resentment of the Bugs into a brushwar against Supertown.  It's up to the PCs to set things straight, preferably by flipping the Bugs to the side of good.  Phase two of the campaign would take the cold war between New Genesis and Darkseid and turn it hot on modern day Earth, just like in Kirby's comics.  Imagine the awesomeness of a laser-powered D&D fight at your favorite landmarks.  Fireballs over the Statue of Liberty, mutant dragons rampaging on the White House lawn, that sort of thing.  Phase three would be kicking ass and taking names on Darkseid's hell-planet Apokalips.

Feel free to steal this idea.  I'm sharing it because I doubt I'll ever use it.

PS: If you haven't answered my quick survey from earlier today, please do so!