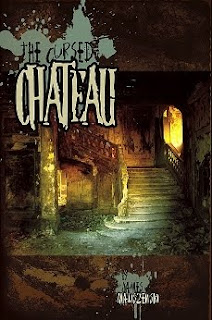 So yesterday I picked up a copy of The Cursed Chateau from my friendly local game store.  This puppy's a 48 page slightly-larger-than-digest sized adventure written by the man who is single-handedly ruining the old school scene, James Maliszewski.  Or did that title pass to Zak while I was at Gary Con?  No one keeps me in the loop about these things.

Anyway, The Cursed Chateau is your basic haunted house sort of affair, the kind pretty much just as home in Call of Cthulhu as D&D.  There's a couple levels of spooky Scooby-Doo mansion and an underground level filled with lurking Things Best Not Disturbed By Man.  It's a stock set-up that I adore, but since it's so cliche I figured I'd quickly flip through this book and throw it on top of my ever-growing pile of OSR type stuff.  Instead, I ended up reading the whole dang thing in one sitting.  I don't do that with many adventures.

What I like most about The Cursed Chateau is the fact that all the key undead have just enough background attached to them to make the haunted house theme work.  If a wraith shows up in the dungeon and it's just another turn undead roll followed by fight or flight, that's just another day's work.  Make that wraith into Rixende the Maid and give her an awesome Erol Otus illo (page 24) and suddenly you have the makings of a memorable encounter.  The devil's in the details and Jamie Mal supplies plenty of deviltry.

And you know I'm a complete sucker for the two page random haunting table.  Boo!

I've only got two minor gripes with this book.  First, the cover makes me a little nuts.  I knew this product existed and asked my local store owner to order me a copy.  Had I just walked into some random game joint and saw this on the shelf I never would have picked it up.  While I've gone on record as being against mimicking TSR's old trade dress, at least that's a clear signal that a book might be of interest to me.  The Cursed Chateau looks to me like it might be a White Wolf product.  I got nothing against the World of Darkness other than the fact that I have zero interest in playing any of those games.  Nothing on the cover tells me this book is for D&D.  Since I already own the book, I've already probably wasted more words on this nitpick than is worth it.  I just want other publishers to keep in mind that if you're going to put your book into distribution you need to make sure I can pick your product out of a police line-up.

Gripe number two is a slightly bigger deal.  As written, the Chateau has one of those "Oh no!  You're locked inside and can't escape!" gimmicks.  I don't mind that at all, but I've seen that sort of thing really push some players' buttons.  DMs who think they might have such folks at their table might want to consider dropping that whole angle or toning it down somehow (stuck inside until the next sunrise, perhaps).  There's freaking the players out and then there's freaking the players out, you dig?

Still, I'd probably use the adventure as is, I just wouldn't push the players too hard towards it.  My reaction to the entire set-up is a bit like how I see James Raggi's hardcore stuff: The Cursed Chateau might work best as the sort of thing you just drop into a wilderness hex.  Then throw out a couple of rumors in the middle of some other endeavors and let the players doom themselves at their own pace.

You should be able to get your own copy of The Cursed Chateau from your own local game store.  Or publisher Rogue Games will be happy to sell you a print or e-book copy.