the flumph beat this? part 1 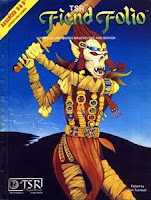 I sometimes wonder if the original Fiend Folio could be used as a litmus test for gamers, because pretty much everyone with a passing familiarity with this tome seems to have an opinion about it.  People either love it or hate it.  Well, maybe hate is too strong a term.  Is there a German word for dismissing something out of hand due to 'obvious' lameness?  Gsundgnugenfreude or something like that.  Anyway, I will readily admit that the FF is chock full of crazy non-sensical monsters.  The difference between me and the gsundgnugenfreuders is that I like it when parts of my D&D game make no sense.

Still, I can see where such folk are coming from.  I don't doubt that most hardcore Folio fans have at least one creature in the book they dislike.  For me its the denzelian.  A super-slow non-hostile slime monster whose only function is carving tunnels around metal deposits.  Sure, I could write some sort of scenario involving competing mining interests and a stolen denzelian egg, but I'm not sure I really want to. 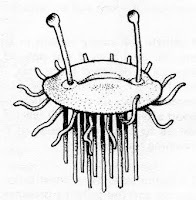 The usual poster boy for the Fiend Folio's arch-goofiness is the flumph (pictured right).  The flumph's been used for a couple good gags over at Order of the Stick.  I'll always have a soft spot in my heart for this creature, ever since that one time in my Bandit Kingdoms campaign.  Ray was playing a Unearthed Arcana-powered half-drow cavalier who wrecked my monsters on a continuing basis.  I scored a solid hit with a flumph death-from-above ambush, using those little spiky things on the underside to deliver flumph-acid right through the cavalier's helmet and directly into his brainpan.  Good times.

Anyway, the Fiend Folio was a product of the UK division of TSR and a bunch of the critters in the book came from White Dwarf's Fiend Factory column.  This was back in the mystical time when White Dwarf was a D&D/rpg periodical, before it switched formats to all Space Marines all the time.  Three issues of those prehistorical White Dwarf featured monsters that didn't quite make the cut for inclusion in the Fiend Folio.   Today we're going to look at some of those beasties. 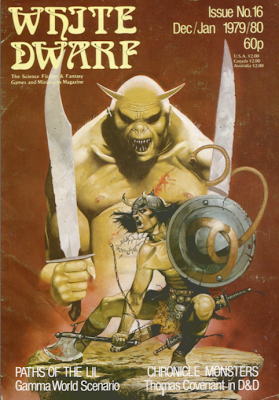 In issue 16 of White Dwarf Don Turnbull presented five of the monsters that failed to make it into the FF.

I think this Plantman was swiped from Edgar Rice Burroughs' Barsoom books. 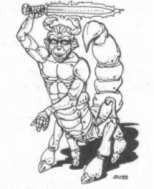 I've seen Man-Scorpion type monsters statted up in other places.  What I like best about this version is that they alway come with a magical sword, shield and armor that are cursed in the hands of PCs.  Also, SCORPION STINGER HORNS, HOLY CRAP!

Yet Another Psycho Girlfriend Monster: The ogress disguises itself as a beautiful woman to lure men to their doom.

Can you cast Floating Disc, Animate Object, Haste and Permanency?  Then you can make your own Tenser Beast.  For no particular reason casting Haste on one of these attack frisbees makes them explode into a shower of shrapnel.

Wow!  It's a friggin' crime against awesome that this Russ-drawn picture of the Wrecker never made it into the FF.  Imagine an official AD&D mini of this guy!  This guy is basically an iron golem/robot type that guards treasure.  They're immune to all spells and can totally bust through walls to get at you.
More weirdoes that got cut to make room for the norker tomorrow.