The Alphabet of the Damned

On backwards planets it is thought that the true name of a demon can be used to summon and bind them. The warlocks of Cinder know the real truth: The name is the Demon! Just as people are made of elements, so demons are constructed of the Alphabet of the Damned. Both existences are equally real, though the psycholinguistic composition of demons is often less persistent in form on this plane, with demons fading into and out of existence more readily than ordinary matter.

The 27 letters of the Alphabet of the Damned are normally translated as A, Æ, B, Ch, D, E, G, H, I, J, K, L, N, O, OO, P, Q, R, S, T, Þ (sometimes written Th), U, V, W, X, Y, and Z. Nothing can be constructed with the runes of the original Alphabet except for the names of demons. Legend has it the original language of the Unknown Hells uses it; all words other than names would be at least 14 letters in length. Smaller words are all devoted to the names of demons, broken down in a rough hierarchy: 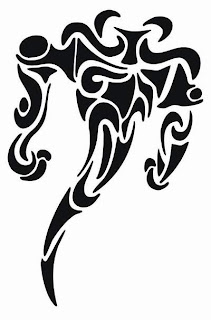 Thus if you know the true name of a demonic being you can roughly gauge its potency by the numbers of letters. Certain sages of Cinder attempt to assign meaning to the various letters. For example, the Damned letter normally written as P seems to only be used in the names of ice demons of various sorts.
Some letters seem to follow certain rules of name construction, such as the letter OO (Double O) only appearing in names of seven letters or greater. Two O's may appear side-by-side in the name of more powerful demons (such as the Lord VEQOO or the Mistress VEChOO, considered by some authorities to be siblings) but the distinction between Double O and two O's is important. In summonings and other demonological work the Alphabet actually becomes a syllabary, each letter being separately vocalized. During the summoning of TLAP, the Queen that Curses the Stars, her name is fully vocalized as Tay-Loo-Ai-Poy, to give one example. To fail to distinguish between two O's and Double O under such conditions would be disastrous. Similarly, the K and Q of the Alphabet are pronounced much the same in ordinary speech, but their ritual vocalizations are distinct.