When I close my eyes and imagine an overhead view of Britain in my head, this is what I see: 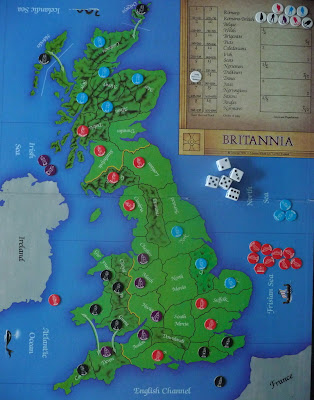 Britannia is a fun game, but the detail is a bit lacking as a basis for a campaign map.  So I went over to boardgamegeek.com and did some judicious searching.  Turns out issue #11 of Wargamer Magazine included a game about Simon de Montfort and the unpleasantness between him and Henry III.  Someone was kind enough to scan in the map, which cropped to the area I care about ends up looking more like this:

Click to get a better view.  There's a little more Wales than I wanted on this map, but that's not necessarily a bad thing.  I wouldn't have minded a large area that incorporated more of the English Channel, the Channel Islands, a little Normandy and the Isles of Scilly but there absolutely nothing preventing the occasional venture off-map.  Sea travel should be mysterious and perilous anyway.

Things I have yet to do to get this map fully operational: