The Minor Magic of Mohney 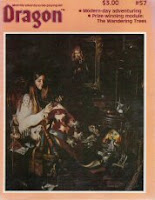 Dragon #57 (January 1982) includes an one-page article by Pete Mohney entitled "Random magic items".  It's little more than four short percentage charts designed explicitly for dicing up inconspicuous lesser items that might be found on random NPCs.  Below are six examples I just rolled up.  The raw results are Mr. Mohney's, while the flavor text is mine.

Exchequer's Sword - The small sword-shaped tin charm hangs from a cheap chain of small length.  Anyone placing this cursed charm around their wrist instantly loses 10% of all monetary wealth.

Macaroni of Melchak - A plain chapeau of the kind worn by peasants, decorated with a sizable but rather drab feather.  While worn the owner of this item is granted one additional hit point per level.

Juju Box - A tiny box (2" x 1" x 1/2" deep) of plain wood, with it's unhinged lid attached via a bee's-wax seal.  A nonsense word (e.g. "arglebargle")  is painted on the lid.  If shook shifting sand or powder can be heard and felt within.  Saying the word while holding the box in either hand raises the wielder's prime requisite to 18 for one turn.  The Juju Box has d10 charges.  Opening the box ruins the magic.

Fiona's Fibula - A plain bronze brooch of the classic circle-and-pin type.  While used to affix a cloak and displayed prominently the owner gains +2 to all saving throws.

Phial of the Perverse Polyglot - A small (1/2 oz) container of some unknown purplish liquid on a lanyard.  When worn around the neck the owner may speak the language of any evil humanoid race.  If the container is opened the liquid instantly vaporizes and the magic is lost.

Triple Charm of St. Nezrat - These three intricately carved ivory sticks have the same dimensions as a chopstick.  Any cleric or druid possessing all three will have a random ability score increased by one point while worn.  Separated the sticks radiate magic but have no function.

I don't recall seeing the name Pete Mohney in any other game product.  A quick search of the net turns up a couple of hits for a computer programmer in Alabama named Pete Mohney who happens to be an Admiral in the Starfleet, the official type Star Trek fanclub.  I'd say the chance of him and the author of this article being the same dude is roughly one zillion percent.