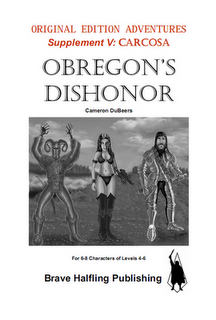 Obregon's Dishonor is the first standalone adventure for Geoffrey McKinney's moral-panic-inducing Supplement V: Carcosa. (Other published supplementary material include an adventure in Fight On! #4 and the free downloadable, The Carcosan Grimoire). Cameron DuBeers, author of Obregon's Dishonor, sent me a complementary review copy. I had planned on buying a copy, but I like free stuff as much as the next guy so I took up his offer to swap a copy for a review here at the ol' Gameblog.
Anyway, Obregon's Dishonor is 36 pages of adventure for 6 to 8 characters levels 4 to 6. That's a level a number based upon Carcosa PCs, so if you want to use this adventure with regular elves and clerics and stuff you might want to aim a little lower.
At its heart the adventure uses the standard Dungeon & Nearby Town format, with a purple-skinned cyborg amazon serving as the Mysterious Stranger that sends the PCs off on their quest. My biggest beef with the module is the assumption that said lavender robobabe will accompany the party on the adventure. In the official novelization she'd clearly be the main character of the story. That leaves the referee stuck between the rock of overshadowing party autonomy and the hard place of playing an ass-kicking super-chick as a the bionic sexpot who lets the PCs do all the thinking and fighting.

Something that might put off some folk is how sexed up this purple lady is. The text makes sure to let you know how hot she and that she'll flash some cleavage during negotiations with the party. Later she'll sleep with one or more willing members of the party. Finally, her last scene in the story involves her clever scheme to defeat a Cthulhoid menace by taking off all her clothes and giving the shambling thing a massive woody. And I could see some folks not digging on the fact that the author takes the time to point out the dark purple coloration of her nipples and labia. Personally I find all that ridiculously ignorable and much less of a problem than the fact that there is this bigass plot that this NPC is such a key factor in.

One other slightly annoying thing is that the entrance to the dungeon is in room 22. Am I the only one who expects the first room of the dungeon to be labeled Room 1? Anyway, the dungeon itself seems pretty serviceable. It's a one level affair that seems a little heavy on 'holy crap! that's a lot of bad guys!', but I can totally work with it. There's one room that if mishandled by the players can kill them all and utterly wreck the dungeon. I like that a lot. It shows the designer isn't afraid to let the situation spin wildly out of control.
I also have one organizational issue. Before the dungeon is a great description of the Nearby Town, its history and the important players in local politics. This is good stuff. But it should be right next to the key to the town map that appears in the back of the book. Instead, the dungeon sits between these two sections.

The last four paragraphs might give you the impression that there's a lot to bitch about in this module, but I actually really like a lot of what's going on here. The dungeon looks like a fun romp and the town has more going on than most such backwater adventuring bases. I would totally run this module either as a one-shot or part of a larger Carcosa campaign. And I'd consider running the town and dungeon in another setting, though I'd probably chuck the plotline. If you choose to follow the plot, there's a neat little dilemma at the end and the possibility of a mass combat. Also, it's totally cool to see someone else's take on a corner of the weird world of Carcosa. Finally, the dungeon was built by beer-swilling atheist monks. How cool is that?

So despite a few oddities and flaws, I recommend Obregon's Dishonor to folks running Carcosa or people willing to do some work to make a fun little adventure fit into their home campaign. The print version is sold out, but you can buy the PDF from Brave Halfling Publishing.