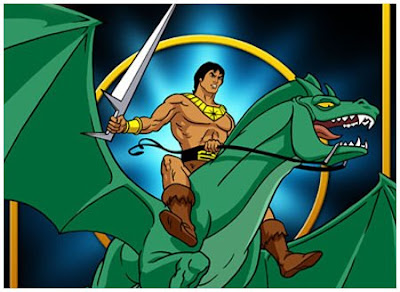 John Blackstar, astronaut, is swept through a black hole, into an ancient alien universe. Trapped on the planet Sagar, Blackstar is rescued by the tiny Trobbit people. In turn he joins their fight for freedom against the cruel Overlord who rules by the might of the Powerstar. The Powerstar is split into the Powersword and the Starsword. And so with Starsword in hand, Blackstar together with his allies, sets out to save the planet Sagar. This is his destiny. "I am John Blackstar."

This 1981 Filmation series is probably the best sword & planet/science fantasy adventure cartoon ever broadcast on American network television. 80's Buck Rogers falls into a blackhole, ends up with a Conan outfit and one-half of He-Man's sword. He teams up with a sexy alien sorceress, some Seven Dwarvish tree halflings and Meteor Man from the Galaxy Trio. These good guys adventure across a weird world, battling the forces of the local Darth Vader knockoff. So much is stolen from so many places that it all somehow works together. Did I mention dude rides an awesome dragon? Sweet.
That this show only got one season is a crime, but at least you can get it on DVD now, unlike Thundarr the Barbarian. 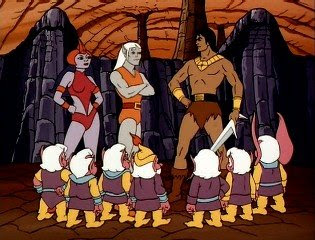 I read once somewhere that John Blackstar was originally going to be African-American, which would have been both cheesy (Black astronaut named Blackstar falls into a black hole? That's Stan Lee level nominative destiny.) and totally awesome. Apparently the dude at the network felt my fellow youths and I weren't ready for a sword-swinging space brother as the lead in a series. Boo hiss.