It is only right that I start this thread with one of Dr. Rotwang's contributions to the Overly Honest RPG Book Covers, an excellent thread at RPGnet inspired by SomethingAwful's photoshop-fueled hooliganisms. 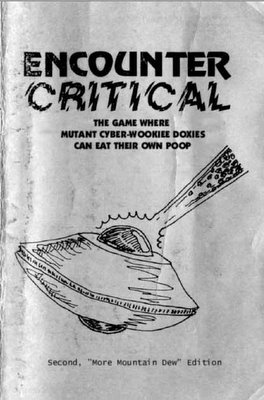 I think it was back in September or October that I first mentioned the fact that Encounter Critical has stolen my heart from World of Synnibarr. Don't get me wrong, I still like World of Synnibarr more than any sane RPG enthusiast should. But EC manages to cram into its 32 digest-sized pages almost as much sheer loopiness as contained in Synnibarr's nearly indigestible 500 page girth. Encounter Critical is old (the second revised edition was published in '79) and mind-numbingly obscure, perhaps not quite as obscure nowadays as Excursion into the Bizarre but pretty damn close.

So what makes Encounter Critical so special? The first reason is the author's proclaimed devotion to "true scientific realism" in a roleplaying game that features apes and elves and "klengons" and robots and magic spells and anything else you want to include. Crazy. The random mutations table that can allows you to "ignore gravity" or gives you "edible excretions" stands as People's Exhibit Number One that Scientific Realism never met Encounter Critical. Yet designers Hank Riley and Jim Ireland have the balls of steel necessary to say in the introduction "If you are a newcomer, you can enjoy the assurance that this is the only game we know to include true scientific realism in every system."

Then there's the fact that this game was kitchen sink before kitchen sink was cool. You really, truly can play a cyborg-ape ninja/pirate with no tweaking of the rules necessary. Lots of games allow you to play anything, 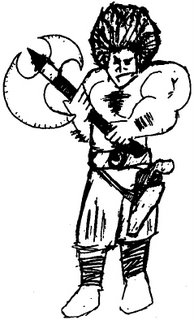 whether we're talking about generic systems like GURPS or chaotic freak-outs like Rifts. But Encounter Critical liberally rips off the author's favorite geek fodder and, with only the thinnest of veneers, smashes them all into the same game. So Tolkienian elves and dwarves can hobnob with coldly logical "vulkins", aggressive "klengons", and wookies. In this class-based system your PC can be a standard swords-&-sorcery Warrior or Warlock or Criminal (thief). But you can also seek out new lifeforms and new civilizations as a Pioneer or cloud minds and levitate stuff as a Psi Witch (read: jedi) or you can play a Doxy, "the class of harlots, concubines, pleasure Robodroids, and go-go dancers." The monsters you fight range from Bee Girls to Godzillas to Orcs to Smog Monsters. The dazzlingly goofy possibilities are endless. It's like if Synnibarr is a slightly-nauseating beer buzz then Encounter Critical is a full-on Nyquil-induced hallucination.

The point of the game, like all the best early RPGs, was to "have adventures". And EC gives you some nifty little tools to accomplish that end. Take the sample campaign map, for instance. The art is extremely crude (I could draw this map myself) but the "Mighty Land of Vanth" is chock-full of nifty places to go. You ever look at an RPG map ( 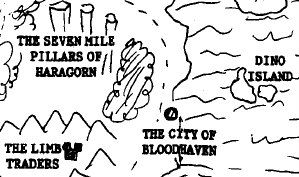 or one in a book or a real map for that matter) and see a place that just begs to be visited? I sometimes find myself pointing at spots on maps and saying out loud "I'd love to visit that place." Maybe it's one of the ruins markers on the Darlene map of Oerth. Or maybe I want to peer behind the Black Curtain on the TNE sector map. The Encounter Critical map is chock full of these kind of places. What adventurer worth their salt wouldn't want to find out what dangers await in the Holdings of the Zombie Princess or to visit the Ape Sultans?

Another great idea that makes the game all about the adventure is the advancement system. You have experience points and levels just as Gygax and God intended, but to qualify to advance a level your PC must also do something new and interesting. Warriors must defeat a foe of equal level using a new weapon, either one they haven't wielded in the past or an entirely new weapon of their devising. Warlocks must add a new spell to their spellbook. Criminals must come up with and execute a new illegal scheme. Doxies must find and seduce a new and more influential client. Pioneers must discover a new place or a new route between known locations. All this sounds like a great way to put the ball into the players' court. "Hey, I've got enough XP for level 4. Would you guys help me rob a bank?"

Finally, the slam dunk for Encounter Critical's greatness is its insane stat/skill system. Most of the nine attributes are pedestrian items like Dexterity and Strength, but there's also oddballs like also Adaptation and Robot Nature. Each of these stats are generated using the classic 3d6 plus racial modifier method. You then consult a series of charts to find out the percentage ratings of your skills. With a few exceptions for class-based specialty skills, all PCs have the exact same list. So any character with an Adaptation score of 11 will have Camping 50%, Consume Alien Food 7%, Appease 49% and Invisibility 63% while a PC with Robot Nature of 17 will have Unpleasant Order 90%, Logic 22%, Seduce -22% (a modifier to a skill tied to another stat), Invisibility +13% (so a PC with Adapt 11 and Robot 17 will have a net Invisibility of 76%), Guard 80%, Labor 100%, and Machine Friend 51%.

These skills sound crazy and they are, but they are also quite useful. Do the PCs want to activate a robot found within a ruin? Have them roll Logic to figure out how to turn it on and Machine Friend to make sure it isn't immediately hostile. If the party needs to camp out for the night in hostile territory, have someone roll Camping to find a good spot out of the way from enemy patrols. If they blow that, then the person standing watch can make a Guard roll to be able to alert the group before an attack. Some of the skills require interpretation based upon the race and/or class of the character. Consume Alien Food doesn't really work for a Robodroid PC, but should they need to recharge their batteries while onboard an alien spacecraft, a successful Consume Alien Food roll would indicate that they could adapt to the non-standard power supply. Similarly, some skills are actually magic effects when used by certain classes. For example, the Invisibility skill is simple equivalent to a hide in shadows skill. Unless you happen to be a Warlock, in which case you can pull off true invisibility. Or a Psi Witch could use the skill to cloud men's minds. The magic system is where this dynamic really comes into its own. Most folks use skills like Conjure or Ensorcel to activate magic items, but Warlocks can use the skills associated with the Magic Power stat to achieve nifty magic on the fly effects. Combine this with a limited number of traditional D&D-style spells, and EC manages to put together a magic system that is tailor made for rules-light sword & sorcery.

Other little gems of inspired lunacy can be found throughout the EC rulebook. Really, if you've followed me this far and are the least bit intrigued by the game you ought to just get yourself a copy. You can download a legal PDF of Encounter Critical here or over in the Files section of its yahoo fangroup (scroll down a bit for the former, registration required for the latter). There's also a few other items at the yahoo group, as well as a way to communicate with a couple dozen fans of the game.

And if you plan on attending Winter War in February, you can experience the insanity first hand by signing up for my EC game scheduled for the Sunday of the con. They'll be robots and warlocks! Hell, one of the PCs is both! 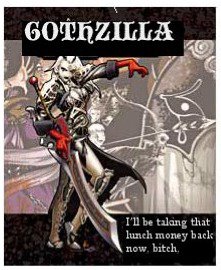 I know I'm a bad person for saying it, but that version of the cover makes me want to play Exalted : The Abyssals.