Check out these spaceship figs 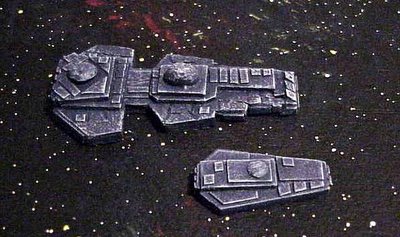 They're scratch-built from balsa and cardboard and I think they're pretty cool. More importantly, I think the technique used to produce them looks like something I could do myself. I've been pouring over the Starship Combat News miniatures pages a lot lately because I'd really like a couple of fleets of figures for some hot ship-on-ship action. But which figure line? The various Trek lines are kinda expensive if you want to field a large fleet. The official Star Frontiers ships are rather large for use on a Starmada style hexmap and only a handful of designs were produced. Brigade sells some excellent figures. I particularly like the new Yenpalo aliens and the two new EuroFed models are the best faux-Star Destroyers I've ever seen. DLD Productions sells a single fleet called the Vin'Grun that looks pretty snazzy:

I also like the designs from Force XXI, but that shop is currently closed. I believe the owner's reserve unit was activated or something like that. Studio Bergstrom has released a neat new fleet of bioships called the Hive, so I guess I could put together a Vin'Grun/Hive war, but two alien races duking it out kinda lacks the pizazz of Earthmen versus bug-eyed monsters. One crazy idea I had was to go with Star Frontiers for my source material, but update the looks of the ships by using a different figure line. Xtreme Hobby's Cold Navy line could fit the bill. The quasi-Klingon lines of the Kharadon vessels could fill in for the Sathar while the good guys could be represented by the Mauridians.

But designing my own ships might be a hoot. And if they turn out well Pat might be able to help me make castings of them so that all my destroyer look alike or whatever. I like the idea of having my own unique vessels with my own races. When it comes to wargaming the puppetmastery of designing scenarios and fluff motivate me just as much as the fun of actual play. And Starmada makes design ships and races with individual identities a snap.

Starmada has been my spaceship game of choice for several years now, but recently I've had a bit of a crisis of faith regarding it's basic movement system. It's non-vector, hex-based, using a movement point system. That makes plotting ship movements easy as pie, but the system has some basic simulation flaws. First, ships can make all sorts of crazy movements in a single turn. Where they sit at the end of turn one does very little to predict where they will be at moving on turn 2. Second, movement is non-vector. Let me quote Aramis, writing on the Citizens of the Imperium boards: "Not having a vector movement system makes it a wet-navy sim, not a space sim. Space vessels simply do not use an MP-system like movement mode."

The largest ship in that shot is over 5 inches long! Unfortunately, that ship costs almost as much as a Studio Bergstrom starter fleet for the Hive. Note the mounting of these ships. They're attached to telescoping poles that allow for six distinct elevations. I dig the looks of this S'Tang Fleet, but the Earthers (the only other fleet available) are rather pedestrian. Maybe the solution is to use the mounting poles with another set of figures.

Now you see the problem I run into every time I'm ready to take the plunge into sci-fi miniatures: too many nifty options for me to choose from.