Christmas among the Geeks

Every family has its own idiosyncratic Christmas traditions. Here's a couple from my family.

Once many Christmases ago I decided that the Christmas tree was the perfect place for my G.I. Joe action figures to take up sniper positions, and so I would conceal a couple of Joes in the branches. This became a sort of Christmas tree decorating tradition but one year no little army dudes were handy but my Hydra from the official AD&D toyline was available, so it took up residence among the candy canes and tinsil. As a teenager I went through a period where I thought I was "too old" for toys, but each December the hydra continued to lurk among the foil icicles. We ended up storing the hydra with the Christmas decorations and when I went off to college my parents started putting the little critter in the tree for my benefit. Well, I'm in my 30's now and have a kid of my own, but when we travel to the grandparents at Christmas there's always a certain five-headed beastie waiting to greet us: 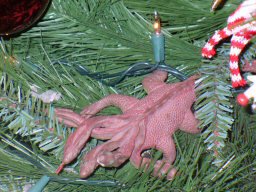 When my in-law's get together it's a gamer-rich environment. My brother-in-law and his sons and my sister-in-law and her hubby are all gamers of one stripe or another. So after the Christmas meal is consumed and presents are opened we inevitable play a game of some sort. Usually it's something from the excellent Brittannia/Vinci/History of the World family of games, where each player directs the migrations and conquests of several whole nations and each turn can represent centuries of time. The past two years we've done History of the World. This time we even got together two days in a row for two different games. I did horribly on the first game, as a year between playings is too long for me to able to hop back on the saddle. I'm quite proud of my accomplishments in the second game. I got the Romans and did quite well (establishing the Empire in India, South East Asia, and China!). As anyone who has played History knows, the guy who pulls the Roman Empire has a target on his back for most or all of the rest of the game. Despite being handed both the Inca/Aztecs and Americans I managed to squeak out second place on tie-breakers. Huzzah!