Wisdom from the Past: Tony Bath 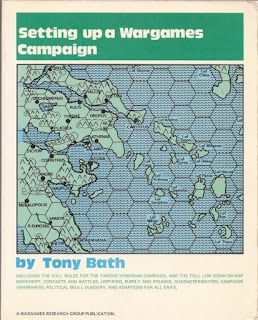 So I recently read Tony Bath's 1973 book Setting Up a Wargames Campaign. This guy isn't discussed a ton in old school gaming scenes (though I'm sure if I looked I'd find that Grognardia and/or Playing at the World have already written about him and I just missed it), but he is one of the granddads of miniatures wargaming. His Hyborian age campaign was one of the first, if not the first, attempt to build an imaginary milieu specifically for longform gaming. Today I wanted to share my three favorite bits from Tony's excellent book. The first is a statement fairly early on about the mental attitude with which one should approach the hobby:

It is however true of campaigning, as of so many other things, that the amount of enjoyment to be obtained from it is pro rata to the amount of effort that is put into it This will vary from person to person and group to group according to how much time and interest people have to spare, but the main ingredient necessary is enthusiasm for the project and a sense of responsibility toward the other players.

I really like that last bit. He goes back to that theme once or twice in the book when he describes how rules disputes and weird edge cases were solved in his wargaming circles by simply having adult conversations until a consensus was reached. What a crazy concept! He also mentions in passing his primary means of discouraging cheating: stop playing with cheaters. Keep in mind that Bath operated during a time when the wargaming scene was so small he very probably knew every active wargamer in England. The price of excluding a player was quite high in terms of shrinking the player pool, but Tony was quite willing to pay that price if the player in question was socially obnoxious.
The other two things I wanted to share are game mechanicy. The first is his card-based system for fleshing out character traits for rulers, generals, etc., in his Hyborian campaign.

So, for each person's character you deal out seven cards. The first card dealt will decide upon his or her's most outstanding characteristic: a Heart will indicate Good Nature, a Diamond Love of Wealth, a Spade Ambition, and a Club Lave of War in a man, Patriotism in a woman. The value of the card will determine the depth of this passion, a high card being very strong, a low card relatively weak. The rest of the cards are used individually, and each hasa value of its own, as given below:

Bath also notes than an upside down Ace indicates some sort of physical abnormality or defect, such as a hunchback. I immediately thought of Peter Dinklage's character on Game of Thrones and Emperor Claudius' stutter in I, Claudius. Anyway, here's how Tony puts these card draws all together:

So, you deal out your seven cards and proceed to evaluate the character. In most cases. this will be straightforward enough, but on some occasions conflicting cards will show up. lf, for instance, you tum up a Nine of Hearts and a Nine of Spades, then physical beauty obvlously cancels out physical ugliness and you discard both cards. An example of a character reading might be a deal of Knave, King, Ten and Nine of Hearts, Nine of Spades, Nine and Two of clubs. This would give you, assuming a male, a very good natured fellow, brave, handsome, very loyal, but a touch arrogant. Of your three nines, two are beauty and one ugliness, so the three finish up as one beauty card.

The final thing I wanted to share was Tony's ingenious method for hidden movement on the campaign map when only two people can play in a campaign:

Where only two people are engaged in a campaign they will have to make do without the services of an umpire, and problems therefore increase. Obviously they cannot both just move pins or counters around a single map; even though the opposing player may not be sure exactly what the pins or counters represent, it will still give him far more information than he is entitled to. Some method of concealment must therefore be devised, and one of the best is the matchbox method. For this, you need a matchbox for every reference point - either hexagon or hexagon face - on your map. It may take you a while to collect this number of matchboxes, but if you appeal to friends, neighbours etc. to collect for you things will go quicker. You then glue these matchboxes together in a square or oblong as shown on the diagram, and number both sides of each box with the map reference it represents.

Your two players then sit at a table with the matchbox collection placed between them. Each has his own map in front of him, but far enough away to be illegible to his opponent. Each has made his opening dispositions on his own map and provided himself wlth a numbered counter to represent every separate force he is using. Moving alternately, the players now place their counters in the matchboxes and, as the troops move, move them from box to box. In the course of this, if they traverse several hexagons, the player is of course entitled to look in the requisite matchboxes representing the spaces he has moved through. It will probably be best for the player not moving to tum his back while the other does so, otherwise by looking at the reverse of the matchboxes he could possibly gain some unfair indication of where his opponent is moving. [Following this Tony briefly discusses not playing with cheaters.]

Up till the time that a player finds one of his opponent's counters in a matchbox that he is entering or passing through, no disclosure is of course made of strengths, dispositions etc. When two counters reach the same box, however, some information has to be given... A commander who discovered that he was faced by greatly superior numbers was able ta refuse battle and withdraw; unless, of course, his opponent had managed to cut off his retreat by some method, either by placing a second force across it or by interposing some obstacle. This led to quite a bit of jockeying for position, and encouraged both sides to push out small forces in advance · to feel out the enemy and try to gain a picture of his overall dispositions.

This matchbox map approach is an absolute delight. In addition to the hidden movement element, it would also allow a campaign map full of counters to be easily stored on a shelf in between play sessions.

I love it when I read old gaming texts and find great ideas ready for revival.