Wizard's Crown was a pretty decent computer RPG of the early eighties. The tactical combat system was robust for its day, using a top-down map with placement and movement mattering in fairly sophisticated ways.  If you played any of the popular "gold box" D&D computer games, you played an upgrade of the Wizard's Crown system with larger and more colorful sprites.
I didn't get anywhere near finishing Wizard's Crown. As I recall, something about the skill system was too grindy for my taste and it took a long time into the game before any cool monsters showed up. The "vorpal bunny" of Monty Python fame is the one decent monster I can remember right now.
One feature I remember distinctly about the game is the marching system. On the strategic map, the party is represented by a single anthropomorphic icon, as was common in the day. But when moving on a smaller scale map, the whole party is displayed. Like the image below. The party is entering a tavern from the left side of the screen. The box around the one character indicates he has been selected by the player. Any keypress for movement will move that character. The rest of the party follows, but not in an entirely predictable way. 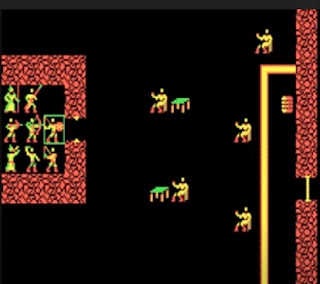 You can see this play out in the video below (from which I grabbed the image above), which I've queued up to the bar scene. One slightly confusing factor to know ahead of time: two door guards come into view only as the first party member enters the tavern.
I very much like how marching plays out. Generally, the party follows the leader in something resembling the marching order desired, but sometimes people wander a bit out of position. For example, a combat can start at an inopportune time when your wizard, normally well-covered by fighters, is a square or two out of position and thus vulnerable to enemy crossbow fire.
Which brings me to the question in the title of this post. With its wargaming background, where pieces move across the board in orderly ways like chess pieces, D&D tends to assume that marching order is a fixed thing. Heck, that is one of the main uses for minis mentioned in early rules sets: using the PCs' figures to set the marching order. But are D&D parties more like marching Prussians or undisciplined skirmishers?
This depends on the level of discipline that you believe your party can achieve. Unless there's some reason to believe they are  well-drilled professional dungeoneers, I think it is more likely that the party generally resembles the marching order at any given point rather than exactly replicates it. Maybe at the moment an encounter occurs the halfling is examing a small mushroom and is out of position. Maybe the cleric stopped to scratch his butt and is a couple of steps away from where he should be. This makes sense to me given my usual assumption that the typical assemblage of murderhobo types lack a certain level of operational sophistication.
The trick, of course, is how to implement this insight into a tabletop game. Given how much time is spent in my games trudging through smelly tunnels, any new mechanic would have to not be a drag to do four or five times in a session. Would something like this work?