First Casualties in the Disputed Zone 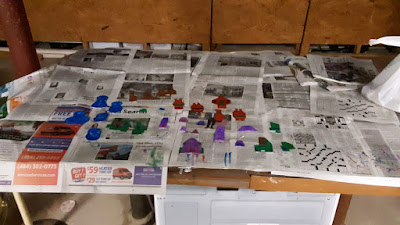 So last weekend my daughter and I spent a few hours painting some crude spaceship miniatures I made out cereal and cracker boxes. It was a fun little craft time with my number one pal. 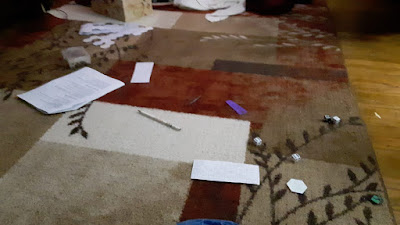 Today we playtested the first full draft of Disputed Zone, a set of spaceship rules I've been working on. If you're familiar with Full Thrust, Starmada, Star Fleet Battles and Star Frontiers Knight Hawks, there's not much new to these rules. But the specific pastiche is what I like in spaceship games, which is large number of figures zooming around until they explode spectacularly.
But today we only playtested a one-on-one duel. The Brandibuck, a Twilight class light cruiser from the Quazonian Harmony (the purple vessel) encountered the Daggergaze, a Durgozian destroyer of the Swift Vengeance class (a brown vessel barely visible thanks to the rusty-red carpet square). Neither vessel was able to bring its primary weapon to bear, but a lucky shot from the Daggergaze's secondary lasers penetrated the Brandibuck's shields and blew it to smithereens. We only got through one full turn and probably would have done another, but the oven timer went off. The pizza was done. Elizabeth swore that the Brandibuck would be avenged some day.

She took the photos, by the way.