the mightiest of torches

Here's an old illo from Dennis Loubet, one of the greats of game illustration in my opinion. You may recognize his style from the Ultima series of games. He also did work for Metagaming and was the illustrator for Steve Jackson's Cardboard Heroes, the first paper minis I ever encountered.

Anyhoo, I wanted to share this particular pic because it shows some members of this dungeon party carrying two-handed torches. You can find historical depictions of these bigass, long-burning torches in late medieval and early modern art, but I think this is the first instance I've found of them making their way into a D&D-type illo. Here's one of my favorite historical depictions: 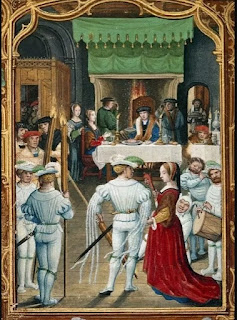 How might these bad boys be statted up for our games? To be worth devoting both hands (and thus making it one party member's whole deal for the expedition - another good reason to have some NPC lackeys in the crew) the gain in burn time should be substantial, possibly also with a small gain in the amount of light it throws. Maybe 5 times the burn time, with +10' to the radius illuminated? For that, it should cost more than 5 times the price of a standard torch, maybe ten times. The thing to watch out for when pricing for your campaign would be to find a sweet spot between the low cost of a regular torch and the longer burn and better control of a lantern and oil.

PS: Also, note that several people in Loubet's illo are carrying torches. A dungeon crew with just one light source is begging the DM to find a way to extinguish it.