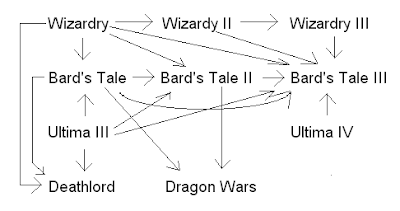 Some early D&D-type games for home computers allowed the importation of characters from other early D&D-type computer games.  Above is an attempt to map some of them.  Not all versions supported this features (the C-64 version of a game might support such a feature, while the Apple II version does not, etc.) so this map is at best an ideal.  A few interesting bits of trivia: