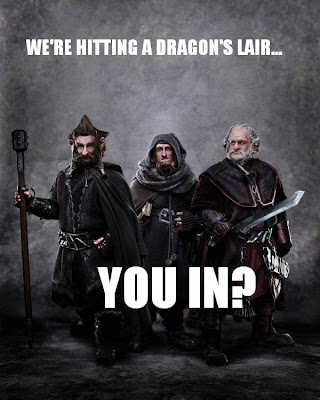 Earlier Jamie Mal posted a publicity still from the upcoming film version of The Hobbit.  These guys definitely look like the kind of sons of bitches I'd want on my team for a little lair looting.

At one point I had statted up for my Bandit Kingdoms campaign an NPC party formed of one Randolph the Red, a human wizard, a surly halfling called Mr. Daggins (don't ask him his first name unless you want a fight) and a dozen dwarves.  Each dwarf had a different class, drawing on all the material available to me at the time.  Beyond the normal Fighter, Fighter/Thief, Fighter/Cleric etc. the group included Dragon magazine classes, things like a Death Master, a Smith, a Thief-Acrobat and some 3rd party nonsense as well, like maybe an Arduin barbarian or something.  They were all classes that dwarves could legally take, assuming you allowed that class in your campaign.

They were going to be part of the Search for the Crown Jewels adventure, with said crown jewels being part of the dragon's hoard that Randolph and company were trying to claim.  I was hoping to draw the players into a World of Greyhawk version of the Battle of Five Armies, with the players on the side of the goblins.  (The nicest guy in the party was Chaotic Neutral.)  But the players rejected the story line so we did something else entirely.